Marion Cotillard came close to quitting acting at the age of 27 to pursue a career in charity work because she wasn't being offered roles she wanted to do. 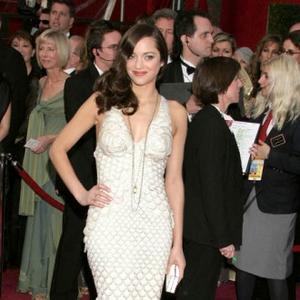 The 34-year-old star - who earlier this year won the Order of the Arts and Letters from the French government for her services to the country's culture - admits she became dangerously close to quitting the acting profession because few people wanted to cast her, but came back to the idea upon the advice of her agent.

She said: "The directors I dreamed of were Coppola, Scorsese, Tim Burton, David Lynch, Spielberg because of 'E.T.' I wasn't considered an actress.

"I didn't want to get bitter while waiting for something to happen, so when I was 27, I told my agent I was stopping and going to work for Greenpeace. He said, 'Please just have this one meeting.' It was with Tim Burton, for 'Big Fish', and I got the part."

Despite nearly quitting, Marion does feel like she has always wanted to work in performance because she always enjoyed portraying other people.

She told US Vogue: "As a teenager, I didn't want to be me; I wanted to be many different people. Maybe I realized that they all lived inside me and that if I managed to connect with them, they would become aspects of me."

Such a feeling helped her portray Edith Piaf in 'La vie en rose' - for which she won the Best Actress Oscar in 2007.

She said: "There was one little problem: The finance people didn't want me. I learned how to make the space inside me for her to come in."