Francois Ozon's new French-language film, Jeune Et Jolie ('Young and Beautiful') explores one girl's venture into prostitution and the impact it has on her life via a beautifully shot coming of age story. Isabelle's Balance Between Schoolwork & Prostitution Is Upset After She Is Discovered.

Isabelle (Marine Vacth) is a young and flawlessly beautiful young girl who makes the decision to earn her way through working as a prostitute after she loses her virginity. Things are going well as she gets to explore her sexuality, revel in the praise of older men and rake in the cash. That is, until she is found out by the police via one of her online, half-nude shots and her parents become involved.

Her mother is particularly devastated and scared for her vulnerable daughter and Isabelle must choose which path she ought to follow now her dangerous double life has been unveiled, leading to an emotionally-charged climax.

The trailer begins with a monologue from Isabelle: "I liked making the appointments, chatting on the internet, talking on the phone, then going. It was like a game." Meanwhile we see the young girl dressed as a businesswoman entering a swanky hotel and being told to enter after she knocks on a door.

Isabelle fobs her loving family off with claims that she'll be doing homework until late at a friend's house and we next see her darting sultry looks towards handsome clients, being told she's beautiful by one of them, and nonchalantly smoking in bed whilst a man gets dressed; a far cry from the reality for most sex workers throughout the world. Whilst Ozon's movie is a justified look at the arguably lower-risk world of high class prostitution, it could be accused of making what is a prevalent and troubling world problem through the sumptuously shot images of an attractive young girl from a middle class background looking to earn some pocket money. Regardless of the client's profession or the prostitute's socioeconomic background, the sex industry is still shaded in violence, drug use and sexually transmitted disease; aspects which appear to be played down in Ozon's stunning film. Is Prostitution Depicted As Glamorous In 'Jeune & Jolie'?

With Charlotte Rampling, Géraldine Pailhas, and Frédéric Pierrot also starring, the film has had a heavy run at this year's numerous international film festivals. It first premiered at Cannes in May where it was nominated for the prestigious Palme D'Or. The cinematographical focal point is the four seasons/four songs concept that depict a troubled young girl's year, charting the highs and lows of balancing schoolwork with paid sex.

Jeune & Jolie will be released in the UK from the 29th November. 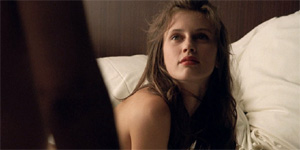