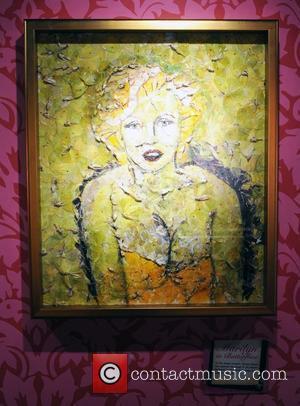 Picture: Marilyn Monroe artwork made of wings of jungle butterflies on display at the 'Ripley's Believe It or Not!' exhibition at Trocadero in Piccadilly Circus London,...

A man claiming to be the lovechild of Marilyn Monroe and former U.S. president JOHN F. Kennedy has launched a court battle for a share of his 'father's' estate.
New Yorker John R. Burton - who has changed his name to John Fitzerald Kennedy - has come forward 45 years after Kennedy was assassinated in Dallas, Texas.
The 53-year-old has filed papers at Manhattan federal court insisting he deserves a fair share of Kennedy's fortune.
He also calls for DNA testing to prove he is the late president's eldest son.
The lawsuit reads, "In his will, each child of President Kennedy was to receive a certain amount of money each year pursuant to the terms in said will."
Susan Frunzi, representing the Kennedy estate, tells the New York Post, "I assume it's a frivolous lawsuit, and it wouldn't be the first time that people have filed frivolous lawsuits against this family."
John F. Kennedy had two children with his wife Jackie Kennedy; Caroline and John Jr., who died in a plane crash in 1999.
Although he was rumoured to have had an affair with Monroe before his death in 1963, there's no evidence to suggest she bore his child.