Review of Eat Me Album by Marilyn Manson 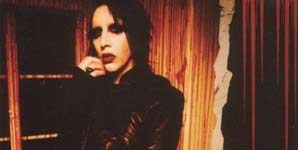 There's something very familiar about Marilyn Manson. You always know where you are with him. Stick on any of his music and his distinctive voice bleeds through like ink on a fresh sheet of blotting paper.

When listening to 'Eat Me, Drink Me' for the first time I found it pretty uninspiring. I was daunted by the impending review I had to write because it's easier to write about something you like or even hate, but in this case I found myself filled with something short of apathy. Riffs, vocal parts and song composition was, basically, Marilyn Manson by numbers. Even lyrically it was hard to find something in there that spoke to me and stood out, that stirred up scenes beyond something that you'd typically find in an Anne Rice novel.

After two or three more plays the album sits more comfortably and I find myself less disappointed. 'Red Carpet Grave' stood out to me first. The intro was something more contemporary, you could see the attempt to move with the times. I hoped that our Anti-Christ Superstar had managed to pull himself out of his turgid musical grave and jump fearlessly into, somewhat, uncharted territory. He almost does. What he seems to have done is written off the last couple of years worth of work (forgivable) and gone back to his 'Mechanical Animals' mindset.

Heart-Shaped Glasses proves to be a morsel of delight. As I suck at the candied intro I discover the sweet, sticky licks and a rhythm suited to the proudest toy soldier. In this case we also find that he is actually still capable of weaving a tale; instead of writing a series of throw-away phrases that guy in the mediocre goth club would use. Nice one Manson. Unfortunately 'Evidence' follows and is thoroughly disappointing, any Marilyn Manson fan will clearly note that it's just a sodomised version of '(s)AINT' (Golden Age of Grotesque).

It's never nice to see someone you're musically influenced by fall from grace. Marilyn Manson is, in my opinion, under-rated. It's just a real shame that he's not managed to shine in this, what is heralded to be something '...he has worked all his life to get to.' In short, if you are a fan then you will probably share in my disappointment. If you're not familiar, may I suggest you spend your hard earned cash on something more reflective of him at his best. 'Antichrist Superstar' or 'Mechanical Animals' are both bench marks of his career. 'Eat Me, Drink Me' just doesn't deliver and smacks of Manson trying to claw back something he was onto a long time ago.