Review of The Pale Emperor Album by Marilyn Manson

With a career spanning two decades containing run-ins with the law, the media, the church, common decency and millions of angry parents, it seems strange that nowadays Marilyn Manson's biggest enemy is himself. Since 'The Golden Age of Grotesque' in 2003, Manson has been attempting more and more to be perceived as an artist, but the public just remembers Manson as the spooky provocateur; you know, the lawsuit for allegedly draping his genitals on a security guard at one his shows, the collection of skeletons and Nazi memorabilia, and that time he posed nude for an album cover save for prosthetic tits and androgynous bump protecting his modesty. I'm sure, in fact, that Manson probably sits up at night unable to sleep because nobody understands him, and refuses to let him go through a Bowie-like reinvention of himself. He will always be shock rocker Marilyn Manson, no matter what he says, wears or releases. 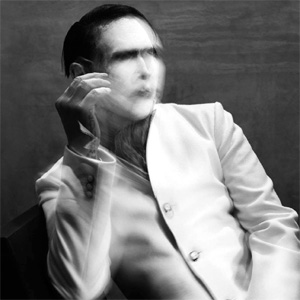 And so, in 2015, we find Marilyn Manson in an awkward place. Does he go down his artistic, intellectual route playing twenty minute long Theremin solos to nobody, or does he throw down a heavy beat and scream his lungs out about something goth? It would be incredibly easy to slag off 'The Pale Emperor', but on this, Manson's ninth LP, he manages to somehow marry the two together with a relative degree of success. It's actually pretty good, all things considered.

That said, the album opens with the Manson by numbers dirge-athon that is 'Killing Strangers'. This song is so typically Manson to the letter that it almost sounds like a parody. It's full of icy cold synths, crunchy basslines, annoyingly apathetic vocal delivery and some pretty turgid lyrics such as, 'You better run, we got guns'. It sounds very tired and incredibly uninspired.

But then something interesting happens. Recent single 'Deep Six' drops and it is a stunning piece of gothic disco metal that could have been shipped in especially from 1999. On this absolute monster of a song, it sounds like Manson has once again found purpose and is ready to tear down everything in his path. The chorus is undeniable and Manson is at his howling, deranged best. Next up is 'Third Day of a Seven Day Binge', which is a more laid back, groovy number that slowly builds towards its climax. On the evidence of these two tunes, Marilyn Manson is back to his glory days.

The middle of the album is more inconsistent, however. There are some great ideas trading blows with some fairly uninspired material. 'The Mephistopheles of Los Angeles' has some great guitar work including an interesting Joy Division-esque guitar figure but that song precedes the absolute non-entity which is 'Warship My Wreck'. This thing lasts six minutes, goes more or less nowhere and is utterly forgettable. There are a few too many moments like this as the album goes on, despite the late return of quality control that is the excellent, acoustic led 'Cupid Carries A Gun'.

If 'The Pale Emperor' shows us anything, it's that Marilyn Manson still has something to contribute. In the better parts of the LP, Manson has purpose, he sounds hungry again, and there are some undeniable tunes here. What is lacking is consistency. Somewhere, hidden inside 'The Pale Emperor' is probably the greatest mini-album of his discography; you just have to look for it.