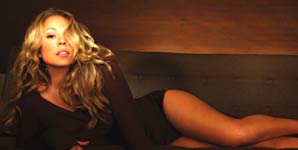 Click here to see the video to the brand new track from Mariah Carey - 'Don't Forget About Us' - out to buy 12th December.

Mercury Records are poised to release the fourth single by of the world's most successful female vocalists of all time, Mariah Carey. The single, 'Don't Forget About Us' will be released on Mercury Records, December 12th. It is the forth single to be taken from her quadruple Platinum selling album 'The Emancipation Of MiMi'.
2005 has been a successful year for Mariah both here and in the US. The Emancipation Of MiMi has gone Platinum in the UK and is Mariah's best selling studio album in ten years.
As a prelude to this single release Mariah Carey focuses her attention on the completion of 'The Emancipation Of MiMi:Platinum Edition', the expanded configuration of her critically acclaimed album.
'Platinum Edition' will recap all 14 tracks on 'Emancipation Of MiMi', whose original version has sold more that 4 million copies in the US alone and over 6 million worldwide to date. The new CD will add four tracks: 'Don't Forget About Us', 'So Lonely (One and Only Part 2)', Mariah's collaboration with Twista (with a new extra verse written by Mariah); the remix of "We Belong Together" featuring Jadakiss and Styles P. (previously only available digitally online); and 'What It Look Like', featuring Jermaine Dupri.

Mariah Carey - With You Video

Mariah Carey - Get Your Number...

Mariah Carey - Youre Mine (Eternal)

Mariah Carey All I Want For...