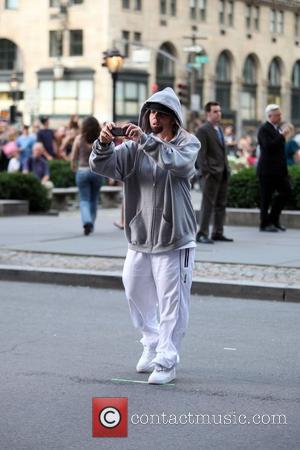 Mariah Carey's husband Nick Cannon denies the superstar has taken a swipe at Eminem in her latest music video by dressing as the rapper - insisting she wouldn't waste her time.
Carey trades in her usual glamorous look to dress as a thuggish man in the promo for new single Obsessed - in which her male persona has a striking resemblance to the Stan hitmaker.
Internet gossips presumed the Hero singer used the video to hit back at Eminem after he boasted of bedding the star in his track Bagpipes from Baghdad.
But Carey's partner, actor/rapper Cannon, is adamant she wasn't planning to take aim at the controversial hip-hop star with her cross-dressing video.
He tells MTV.com, "Honestly, I don't think so. I don't think that she would take her time. My wife doesn't beef. She's Mariah Carey. She's not beefin', she's a vegetarian.
"I always say I thought the record was about me, 'cause I'm obsessed with my wife. But if somebody's out there and you feel like you might have been obsessed, then the record's about you."