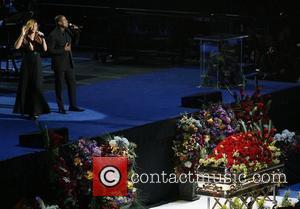 Picture: Mariah Carey The memorial service for the King of Pop, Michael Jackson, at the Staples Center Los Angeles, California - 07.07.09

Mariah Carey's husband Nick Cannon has hinted the singer's war of words with ex-boyfriend Eminem is one big publicity stunt for the pair.
Eminem struck the first blow against the Honey hitmaker by discussing their brief fling in his recent track Bagpipes from Baghdad.
The lyrics included the line, "Nick Cannon you pr**k, I wish you luck with the f**in' w**re."
Carey retaliated by mimicking Eminem in the video for her latest track Obsessed, and dubbing him "delusional" in the lyrics.
This prompted Eminem to strike back again in a new song called The Warning, in which he threatens to release voicemail messages he alleges she left for him during their relationship.
Critics have suggested the battle has been orchestrated to promote Eminem and Carey's new albums - and Cannon appears to agree.
He tells Us Weekly, "My wife doesn't beef (feud). She's Mariah Carey. She's not beef'in. She's vegetarian."