Okay UK a little exclusive for ya, Mariah Carey returns with an absolute monster for today's current electronic driven market place. Mariah joins forces with the man that can do little wrong in the eyes of the urban world right now, his name The Dream, just in case u hadn't guessed. Mariah is on fire vocally over the top of a haunting, droning keyboard, face slapping snare and deep bass line. This mid-beat monster is gonna be all over radio like a rash in the coming months. 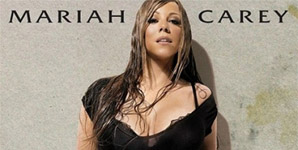 Called 'Obsessed' the song tells the story of woman that has a guy claiming he is with her and having sex with her because none of his chat up lines and bull shit is working on her and he can't handle her rejection. The track is a lethal concoction of fierce beats and powerful vocals that will be a monster hit. I think this was probably meant to be a street single but I don't think Def Jam can control how big this track going to be, a bit like Sony BMG couldn't control Ushers 'Yeah' and we all know how big that record become.