Margot Robbie thought she was going to be arrested and sued for assault after hitting Leonardo Dicaprio during her 'The Wolf of Wall Street' audition. 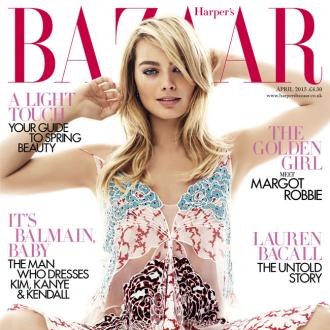 Margot Robbie was terrified she would be arrested and sued for assault after hitting Leonardo Dicaprio.

The 24-year-old actress admits she spontaneously smacked the 40-year-old actor in the face and screamed ''F**k you!'' instead of kissing him in a bid to impress the heartthrob and producers while auditioning for 'The Wolf of Wall Street'.

Recalling the awkward encounter, she said: ''In my head I was like, 'You have literally 30 seconds left in this room and if you don't do something impressive nothing will ever come of it. It's a once-in-a-lifetime chance, just take it.' And so I start screaming at him [Leo] and he's yelling back at me. And he's really scary. I can barely keep up. And he ends it saying, 'You should be happy to have a husband like me. Now get over here and kiss me.' So I walk up really close to his face and then I'm like, 'Maybe I should kiss him. When else am I ever going to get a chance to kiss Leo DiCaprio, ever?' But another part of my brain clicks and I just go, whack! I hit him in the face. And then I scream, 'F**k you!' And that's not in the script at all. The room just went dead silent and I froze.''

While the Australian actress ended up winning the role, she admits she wasn't confident after leaving the audition.

She told the April issue of Harper's Bazaar UK, which goes on sale March 5, 2015: ''I'm thinking, 'You just hit Leonardo DiCaprio in the face. They're going to arrest you because that's assault. You're definitely never going to work again, that's for sure. They'll probably sue you as well in case there's a bruise on his face and he needs to film something else.' ''