Since Hollywood refuses to make clever, engaging films about strong 50-something women, leave it to Chile to give us a movie to celebrate. This delightful comedy-drama has a loose plot that lets Paulina Garcia's terrific title character spring wonderfully to life. And she's never a victim: Gloria is a woman who does things on her own terms. 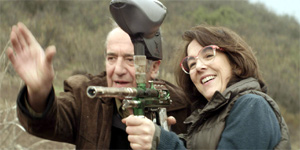 The film opens by showing us how full her life is. She may be divorced, but Gloria enjoys her busy days, going from her office job to yoga classes, laughter therapy and helping her adult children (Fontecilla and Zamora) with their issues. And in her spare time, she heads to the local disco to meet men. It's there that she encounters Rodolfo (Hernandez), a man her age who runs an extreme sports park. As their relationship develops, Gloria begins to worry that he has no interest in her children, and even worse he constantly leaves her in the lurch so he can help his own adult daughters. So she has to make a decision.

The nice thing about Gloria is that she knows she's fine on her own; she doesn't need Rodolfo, but she likes him and is willing to put up with his baggage (including his velcro corset). Watching her deal with him gives us a striking portrait of her independent resilience. Even though she's had a rocky romantic life, she's still hopeful about love and maintains a youthful silly streak. Garcia plays all of this with a blast of personality that wins us over completely.

Gloria is 58-years-old, divorced and no longer has children to care for, but the last thing she wants to do is settle down to a life of quiet solitude. Instead, she spends her nights partying away at the local clubs and bars, and eventually meets Rodolfo - a former naval officer who charms her and makes her feel like a young woman again. However, he appears to be less adventurous than she, and their whirlwind romance begins to wane when she suggests they abandon work for a short while to go dancing in Cuba. She wants to introduce him to her family, but when she tries, he is no longer picking up the phone. The pair are forced to confront their own needs and desires if they want to continue their blossoming relationship.

'Gloria' is an adorable Spanish romance drama about how finding love later in life can be just as thrilling and rollercoaster-like as young love. Directed by Sebastian Lelio ('Christmas', 'El ano del tigre') who co-wrote the screenplay with his frequent writing partner Gonzalo Maza, the flick has been selected as the Chilean entry for Best Foreign Language Film at the upcoming Academy Awards. It will be released in the UK on November 1st 2013.

Rene Saavedra is a talented man who works at an advertising company. One day in 1988, he is invited to work on a campaign for the national plebiscite; a referendum held every eight years to decide whether the military dictator leader of Chile Augusto Pinochet should continue his time in office. He is on the side of 'No' which leaves him under much scrutiny from the opposition and very few resources to present his case and convince the public to vote against the oppressive leader. However, his boss at the advertising agency is working on a campaign in support of Pinochet and Rene finds himself torn between his life and his principles. As he finds himself facing increasing danger as the debate heats up, the 'No' team are praying their efforts will not be fruitless.

'No' is based on the play 'El Plebiscito' by Antonio Skarmeta and has been adapted to screen by director Pablo Larrain ('Post Mortem', 'Tony Manero', 'Fuga') and writer Pedro Peirano ('Old Cats', 'The Maid'). It centres on the real story of the 1988 Chilean plebiscite where the opposition won by just over half of the vote percentage. 'No' is set to hit the UK on February 8th 2013.

By Rich Cline
Very Good
Chilean filmmaker Larrain takes an askance approach to one of his nation's most horrific events, the violent 1973 coup that overthrew Allende. Intriguingly, the film has an almost post-apocalyptic tone. 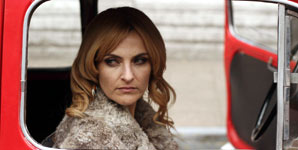 Mario (Castro) works in the Santiago morgue, documenting autopsies performed by Dr Castillo (Vadell) and his assistant Sandra (Noguera). By night, he keeps his eye on his burlesque dancer neighbour Nancy (Zegers), who has just been sacked for being too thin. But Nancy's boyfriend Victor (Alonso) is involved in the anti-government movement, so when violence breaks out and the military take over, Mario's afraid he'll find Nancy in the bodies piling up in the morgue.

Meanwhile he, Castillo and Sandra are called to perform a significant autopsy.

Since Hollywood refuses to make clever, engaging films about strong 50-something women, leave it to... Gloria is 58-years-old, divorced and no longer has children to care for, but the last...

Chilean filmmaker Larrain takes an askance approach to one of his nation's most horrific events,...