Quote: "She has one chin; I had seven chins!" Actress Marcia Gay Harden jokes about Beyonce's twins announcement. The Oscar winnerm, who gave birth to twins 12 years ago, was stunned by the singer's official baby picture.

Quote: "It's called the Red Room of pain and pleasure, so that made me want to go see what it is. On the last day of shooting... Sam (Taylor-Johnson), the director, said, 'Would you like to see it?' and I said, 'Yes, I definitely would.' I went in and it's beautiful. It's lovely, it's a luxury... That, for a woman like me, is the biggest fantasy of all. Maybe there will be a gazillionaire (sic) who will beat me and actually lavish things on me." Single actress Marcia Gay Harden would love to have a rich lover and a kinky sex room just like the one featured in the new Fifty Shades Of Grey movie. She portrays lead character Christian Grey's mother, Grace. The Oscar winner split from her husband Thaddaeus Scheel in 2012.

Quote: "They're really good on-set. They told director Frank Darabont to be quiet. They said, 'Shh! You have to whisper.'" Actress Marcia Gay Harden's three-year-old twins obeyed orders to make no noise while their mother was filming new movie THE MIST.

Fact: Marcia Gay Harden isn't too proud to cash-in a gift certificate. The POLLOCK star recently called jewellery firm Charriol to claim the $2,000 (GBP1,026) gift certificate she picked up at the American Film Institute Festival in November (06). She used the cash to buy a pair of earrings. 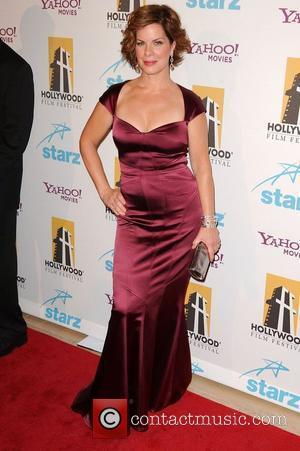