Niko Fischer is a young man who is down on his luck after dropping out of college where he was studying law. He returns to Berlin only to experience a series of unfortunate events. First, he doesn't even have enough change to by a coffee, then he loses his cash card in a broken ATM and then he is refused the return of his driver's license when he is branded mentally instable. To make matters worse, he ends up having a very awkward encounter with a girl he used to tease at school; a girl who used to be overweight but is now a stunning aspiring actress; and his strict father has found out that he is no longer in college. Niko really doesn't know where he's going with his life and with all this bad luck, he's barely being given a chance to sit and think. And is a simple cup of coffee really so much to ask?

'A Coffee In Berlin' (previously called 'Oh Boy') is a black and white German movie billed as a 'tragicomedy'. It has been directed and written by Jan Ole Gerster in his feature film debut and has won more than twenty international film awards since its initial release. It is set to hit theatres on June 13th 2014.

Even though it's perhaps a bit over-constructed, this German comedy-drama is a hugely enjoyable personal odyssey with strong echoes of Woody Allen's classic era. Shot in black and white, the film feels like a minor classic as it follows a loser through a single day in which his whole life seems to hang in the balance. And even though he's an aimless mess, we can't help but love him. 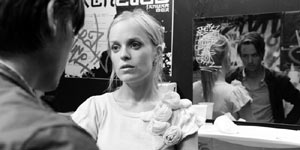 His name is Niko (Schilling), and he begins the day by breaking up with his girlfriend then trying to convince a sarcastic psychologist (Schroders) that he deserves to get his driving license back after a drunk-driving conviction. He hasn't quite moved into his Berlin flat, and a nosey neighbour (von Dohnanyi) seems far too interested in him. So he leaves to hang out with his actor friend Matze (Hosemann), at which point he runs into Julika (Kempter), a girl he used to taunt for her weight at school. But Julika is now thin and hot, so he accepts an invitation to her art performance that evening. Before heading there, he visits his father (Noethen) to ask for some money and drops in on another actor friend (Klawitter) on the film set of a Nazi melodrama.

It becomes clear early on that Niko has absolutely no ambition. So it's no surprise that his father cuts him off when he learns that Niko dropped out of law school two years ago, and has been living off his university allowance so he has time to "think". The comedy comes from the fact that everyone Niko encounters on this fateful day seems to be interrupting his plan to waste his time. And Schilling plays him so beautifully that he earns our sympathy without ever asking for it. He may be a useless slacker, but he's smart, witty and utterly charming. Niko Fischer is a young man who is down on his luck after dropping out...

Even though it's perhaps a bit over-constructed, this German comedy-drama is a hugely enjoyable personal...