The video features a dejected looking man leaving a roadside motel and speeding away down a dusty road on his motorcycle. As he continues to ride through the night, the stars come out and he remembers a painful moment at a dance with an unknown woman who walks away from him. He stops and boards a mysterious spaceship before being jettisoned to space whereby the video transforms into a kaleidoscopic explosion of colour. Opening with atmospheric psychedelic whirs and continuing with tinkling synth bleeps and dreamy vocal echoes alongside a slow beat and some crackling bass, the track is an ambient number with an infectious chorus.

The band; who are singer Sarah Carter, synth player Matthias Garrick and drummer Dan See; have released the new EP as the follow up to their debut effort 'Smart'. The new EP also features the tracks 'What's A Girl Supposed To Do', 'Wheels', 'Little Heart' and 'This House'. There's no word yet on a possible full length debut album to follow.

Mano's Daughter - What's A Girl Supposed To Do

London's Manos Daughter have unveiled an artistically choreographed video for their new track entitled 'What's A Girl Supposed To Do'. The song features on their upcoming EP 'Shiver' which is due out on August 11th 2014 through Smart & Shiver Records.

The video opens with the image of a ballet dancer lying crumpled on the floor amid a scattering of some white powdery substance. We then see black and white clips of two sad looking people; one is a little girl being shunned by her peers and the other is a woman taking refuge in a rehearsal studio. Both girls are highly talented ballet artists which seems to, in the end, be what makes them finally stand out. The beautiful dancing and melancholy mood of the visual works stunningly with the eerie synths and the soulful but understated vocals, that all link together to create a crescendo into an uplifting chorus.

Manos Daughter; who are vocalist Sarah Carter, synth player Matthias Garrick and drummer Dan See; have been garnering much attention since the release of their debut EP 'Smart'. New release 'Shiver' is bound to cement them as a uniquely soulful group with incredible lyrical prowess.

London trio Mano's Daughter have released an artistically surreal video for their newest track 'Tailored', taken from their upcoming EP 'Smart' which is due for release on March 31st 2014 through Smart & Shiver Records.

The video kicks off with singer Sarah Carter in old-fashioned attire sat in a leather armchair holding a cigarette holder and wearing a veiled fascinator. It cuts to images of a flashing lightbulb intermittently, as well as the image of an almost naked man with a restraint round his wrist who is later seen dancing with a dark figure who repeatedly places black handprints on his body. It feels like a clear and deliberate metaphor even its significance is not automatically clear, and there's a firm sense of melancholy with the warped, eerie opening tune and haunting lyrics echoing ominously clear. Far from being a depressing number though, 'Tailored' soon turns into a fun anthem with the distorted, heavy but dreamy synths and a wonderfully catchy chorus.

The band; who are vocalist Sarah, synth player Matthias Garrick and drummer Dan See; have already won over a devoted fanbase which include comedian-musician Tim Minchin. They'll be launching their highly-anticipated new EP at Hysteria in London on March 27th 2014. 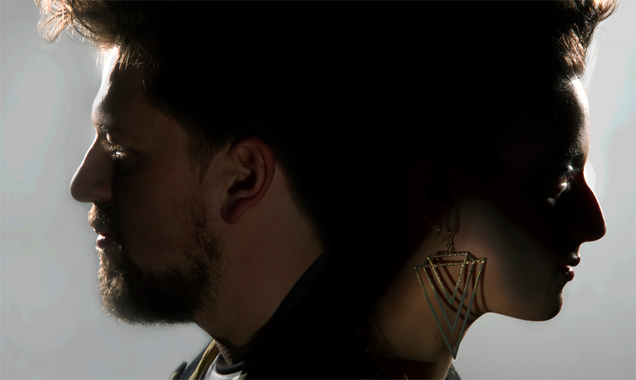 Mano's Daughter are musical pairing and real life couple Sarah Carter and Matthias Garrick. Last year, the duo tentatively released some videos and tracks while playing live shows around London but with their EP 'Smart' about to be released and second EP 'Shiver' hot on its heels, they're upping their game in 2014 - they mean business. Sarah's powerful vocals together with their intelligent synth pop sound heralds a new wave of electro infused acts that are more about the heart and soul of the sound rather than the shiny veneer. Sarah and Matthias chatted to Contactmusic about their plans this year, why they decided to make music and how comedian Tim Minchin became one of their biggest fans.

Contactmusic: What is your latest EP 'Smart' about?
Mano's Daughter - 'Smart' is a collection of songs about life, love and the world we live in. 'The Machine' is an observation of society and the way we are part of something bigger than we know. 'September' is a simple love song but about the harsh but beautiful truth of someone being there for you unconditionally. All my lyrics are usually based loosely around love in some way. It's such a driving force.

Contactmusic: What sets you guys apart from other female-driven, electro, synth-pop bands out there at the moment?
MD -  We have always had an inherent desire to create real songs. Lyrics are a big part of what we do and we always work from the idea that the song is the most important part. We wanted to combine the electro sound but with a depth of real classic songwriting, songs that perhaps don't just rely on their production to carry them through. We feel that a great song can be performed with just a piano and vocal too and still sound great.

London synth pop trio Mano's Daughter have unveiled a mechanic new video for their newest single 'The Machine'. The song is set to feature on their debut EP 'Smart' which is due for release on March 31st 2014 through Smart & Shiver Records.

The video has been directed by Ian Gathard and begins with an image of a sleepy young girl lip synching to the song before singer Sarah Carter takes over the visual, dressed in a futuristic style outfit. There's images of machine cogs and robot dancing to enhance the metaphor of the song, but plenty of energy to reflect the dynamism of the track. 'The Machine' is a driving pop number with dreamy, rich synth sounds and high-pitched, echoing vocals which get stronger as the song goes on adding heavier synths and guitars.

The band; who are Sarah, synth player Matthias Garrick and drummer Dan See; recently released 'The Machine' as a free download which is sure to rapidly expand their already ever-increasing fanbase in which they are proud to include comedian/ musician Tim Minchin. Influenced by the likes of Bon Iver and Moloko, Mano's Daughter themselves have been previously compared to Florence + The Machine and Little Dragon.

Mano's Daughter - What's A Girl Supposed To Do Video