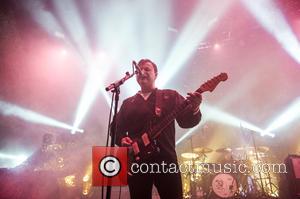 Picture: Photo's of the Welsh alternative rock band Manic Street Preachers as they gave a live performance at the Roundhouse theatre in London, United Kingdom -...

The decision of indie band Hamfatter to seek a record contract on Dragon's Den is a "clever idea", according to one of the UK's best producers.

The Cambridge-based band appeared on the BBC2 show on Monday night seeking investment in their band from a wealthy entrepreneur and secured a £75,000 boost from Peter Jones.

But in the view of Dave Eringa, who produced the Manic Street Preachers' Gold Against the Soul and This is My Truth Tell Me Yours as well as Kylie Minogue's Confide In Me, the band's decision to seek backing from a television show was an innovative concept.

Eringa told inthenews.co.uk: "I think everyone that wishes them ill is really just jealous because it's quite a clever idea.

"You're exposed in front of millions of people and of course they're going to invest."

Jones invested around a tenth of the typical sum offered by a major label, but has given the band total control of their recording and production.

But Eringa added that he believed Jones had agreed "one of the most lenient record deals in history".

"Thirty per cent is an extremely low percentage for someone investing £75,000 to have," he explained.

However, he denied the suggestion that due to the rise of social networking sites, as well as contests such as the Intel Studio Talent Competition, A&R men (Artists and Repertoire) were no longer needed to scout for new talent.

"I think [their role has] just changed," Razorlight manager Roger Morton told inthenews.co.uk. "It probably makes A&Rs more lazy because they can just sit there and go through MySpace sites and other social networking sites and that becomes a primary way of finding bands."

Eringa added: "Classic A&R was about more than finding a band anyway, it was about developing a band and nudging them in the right directions. And that is still essential."

Less essential in Eringa's view, however, are talent contests such as The X Factor, which he admitted to finding "scary".

"Especially the prospect that no-one wants to be famous for something anymore," he added.

Dave Eringa and Roger Morton are online at 2pm on Thursday July 24th to discuss making it big in music as part of the Intel Studio Talent Competition.