The Manics have recorded a track, 'Together Stronger (C'mon Wales)', which will be adopted as the official soundtrack to Wales' first football tournament in over 50 years.

To celebrate the Wales international football team’s qualification for their first major tournament in over half a century, the squad has teamed up with rock veterans Manic Street Preachers to record the official anthem.

Just like Christmas singles or James Bond theme songs, official football tournament anthems are a time-honoured tradition that’s very difficult to actually get right. Formerly solid reputations have been shattered (just ask Embrace), and only New Order can realistically claim to have done it really well. 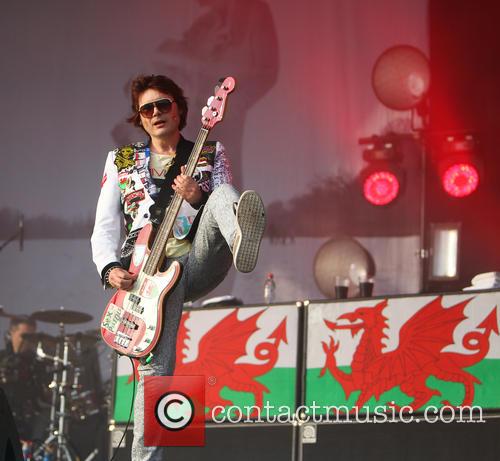 Now, the Welsh rock act, who this year are marking the 25th anniversary of their first single, are to record and release the official anthem of their country for the 2016 European Championships. ‘Together Stronger (C’mon Wales)’ will be available on May 20th, with all proceeds going to Welsh charities Tenovus Cancer Care and the Princes Gate Trust.

For those a bit mystified as to this collaboration (the staunchly political Manics and a team of sportsmen is an odd match-up on the face of it) the group are in fact avid fans of virtually all sports.

According to a statement, the song will “past and present members of the squad and their appearance in a major football tournament for the first time in over half a century.”

Members of the squad, and manager Chris Coleman, met up with the group after a training session to film an accompanying music video. “It was fantastic to be involved with such an iconic Welsh band,” Coleman said afterwards. “Manic Street Preachers have been passionate Welsh football supporters and all the lads enjoyed the experience and joined in.”

Wales face an initial group containing Russia, Slovakia and rival home nation England at the tournament, which is being held in France in June and July. The top three nations qualify for the next knockout round.