Bradfield Terrified Heroes Would Turn Him Down 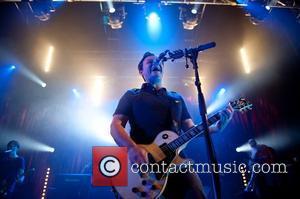 Manic Street Preachers frontman James Dean Bradfield was nervous about asking a number of his music idols to work on the band's latest album - because he was convinced they would turn him down.
The Welsh group returned in 2010 with its 10th studio album, Postcards from a Young Man, which features collaborations with Bradfield's teenage heroes - Echo & the Bunnymen frontman Ian MCCulloch and The Velvet Underground's John Cale, as well as bassist Nicky Wire's icon, former Guns N' Roses star Duff MCKagan.
Bradfield admits he was terrified about inviting the legends to collaborate on the record - because he feared they would refuse to join him in the studio.
He says, "It felt natural to get heroes on the record. We were so surprised those people agreed. It was like asking a girl at the school dance to get up with you.
"Ian MCCulloch was the first person I saw live in 1985... John Cale was a massive inspiration when I was young. Back then we felt South Wales was a bit isolated but to see a Welshman go to New York and communicate to the world in the coolest band in the world was special. When I realised he was Welsh it made me realise it could be done. I had met John a few times and loved his solo work so I bit the bullet and rang him up, But we made sure they were musically relevant and not just used as names.
"I can't believe we have Duff MCKagan from Guns N' Roses on the album. He is one of Nick's favourite players. It does blast away all your cynicism when stuff like that happens."