Review of Everything Must Go (2006) Album by Manic Street Preachers 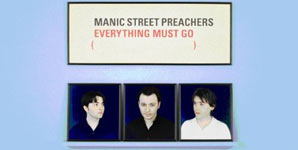 The multi Brit winning 1996 album by Manic Street Preachers, Everything Must Go, is back; digitally remastered, sexed up with new tracks and a DVD and put in the nicest packaging you've seen in your life.

The first album the band released as a three piece, after the disappearance of Richey James, the original album united its fans with the worlds press and made the Manics the biggest band of 1996 snapping up almost every album award going at the time with an Ivor Novello thrown in for the jumbo-track Design For Life. Everything Must Go established the Manics as one of the biggest bands on the planet and though the original cut will ceaselessly stand next to the likes of Definitely Maybe and Modern Life Is Rubbish as one of the greatest Brit-pop-rock albums of all time, this new fangled remixed version is definitely its superior. The original 12 tracks exist in their debut order and adorn disc 1, from the massively thrashing Design For Life, the bands initial 'real' hit, to the acoustic chill of Small Black Flowers That Grow In The Sky and the Sylvia Plath motivated The Girl Who Wanted To Be.

The rest of disc 1 however belongs to the first chapter of bonus material including fantastic and rare live recordings of Design For Life, Enola/Alone and the title track Everything Must Go. The live material shows off the bands ability to perform and what's more of a talent, capture the experience and skilfully reproduce it on plastic. For anyone that missed the band 10 years ago, this album is a masterclass in what they were about with homicidal riffs and biting snare drums a plenty. Few bands in history can claim to have the hold that the Manics did over a crowd and where so many of those shows fail to make an impact played on your home stereo, these 6 spendthrift tunes polish your CD player with all the vivacity that the original performance would have had. Sat on your bedroom floor with a bottle of Vodka and the lights out or entertaining friends on a Thursday night (being the new Friday), this 19 piece musical extravaganza takes you back to a time when your bands played music to impress, not control, and to inspire instead of demoralize.

Further proof of the bands genius comes from an intimidating back catalogue of rarer-than-bleeding-stake rare b sides, demos and alt versions of some of their more rousing songs. There are some real gems on this with the first rehearsal recordings of Kevin Carter and Design For Life, tracks that have never been heard outside the inner Manic circle. The sound quality may be dodgy but the ability to hear the birth of Design is so justly magical that its significance and inclusion on the compilation can't be overlooked and is an honest tear-down-cheek moment of listening for any long time fan.

The fun bus doesn't stop there though as the third disc, an almighty bitch of a DVD, enraptures the visual spectacle of Bradfield, Moore and Wire in a 45 minute long documentary on the making of the album. With Mike Hedges, producer, and the band talking about how the album began, developed and succeeded, this is an incomparable insight into the creative process that has been the subject of intrigue for the 10 years since the LPs first release. Following on, some live video footage comes in the shape of Jools Holland and TFI Friday appearances that helped shape the bands fan base at the time. Their Brit performance and speech from the legendary '96 event round off this section of delightful and carefully planned extras prior to some more live clips from Nynex including a very special presentation of The Girl Who Wanted To be God. Some home movies and promo videos close the show and annihilate any ambiguity that may be remaining over why these guys were, for a short time, the greatest band on the planet.

Some of their material blends together without distinction, but for all its downfalls there are 20 other pieces to pick you back up and remind you of the Manic Street Preachers power and everlasting genius and effect on the music industry and culture. There are 58 tracks in total to this collection, making it more of an anthology than a meagre re-release showcasing a time that changed the face of British, and more specifically Welsh, music forever.