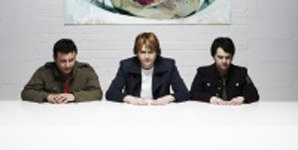 If 2008 was something of a year for musical underachievement, then 2009 must surely go down as signifying the 12 months when unexpected resurgences became the order of the day. While The Horrors have already staked their claim - as unthinkable as that may have been six months ago - to having made the album of the year, no comeback has been greater than that of the Manic Street Preachers in recent months either. Having been declared a spent force many moons ago in some quarters, they've confounded their critics in spectacular style with their latest record 'Journal For Plague Lovers', while reports emanating from earlier shows on this tour indicate they've rediscovered the passionate zest that made them so appealing in the first place.

They've certainly pulled out all the stops that's for sure, and the rumours that the band were to be playing two sets become a reality pretty much on entering the Civic Hall, as the stage times posted on every door and wall proudly announce that the first part of the show will see 'Journal.' performed chronologically in its entirety followed by a ten-minute interval then an hour long greatest hits set.

Now expanded to a five-piece for live performances - Wayne Murray from Boy Cried Wolf on guitars and ex-Rockingbird Sean Reed on assorted keyboards and gadgets - this tour is arguably the most ambitious live schedule the band have ever embarked on, and is as far away from the sets back in the day that barely lasted thirty minutes as is ever likely to get.

Nevertheless, they pull off the album in this setting with some aplomb, totally dispelling any preconceptions that 'Journal.' is merely a studio record enhanced by Steve Albini's harsh production skills. The opening triple whammy of 'Peeled Apples', 'Jackie Collins Existential Question Time' and 'Me And Stephen Hawking' sound as dynamic and incendiary here as they do on record, the band barely pausing for breath between each song before launching into the next one. Indeed, conversation is kept to a minimum apart from James Dean Bradfield asking fans to "name the riff" they've borrowed for the title track (Rush - 'The Spirit Of Radio': seventies rock geekfact) and Nicky Wire reminiscing about his past experiences with the late, lamented Richey Edwards before 'Williams Last Words' brings the first half to a close.

The second part of the show, reserved for a trawl through the Manics' extensive back catalogue, is introduced by Bradfield as "the point where you can all enjoy yourselves and have a dance", and from the moment 'Motorcycle Emptiness' kicks off proceedings, he isn't wrong. The banter from band to audience comes thick and fast, references aplenty being made to Wolverhampton, the various venues the band have played here over the years (early b-side 'Sorrow 16' is dedicated to "those who came to see us at Dudley JBs"), the local Novotel, and even the region's two main football teams.

What becomes more apparent as the set continues is just how many instantly recognisable songs the Manic Street Preachers possess, and even though they reel off sixteen of their finest compositions with ease, the absence of the likes of 'Kevin Carter', 'Everything Must Go', 'The Masses Against The Classes' or indeed anything off the much-maligned 'Know Your Enemy' and 'Lifeblood' long players doesn't go unnoticed.

However, when you've got such life affirming gems as 'You Love Us', 'Faster', 'If You Tolerate This Your Children Will Be Next' and 'Motown Junk' to throw into the mix, it really doesn't matter that 'La Tristessa Durera' finds itself scuffed two-thirds of the way through, or that 'You Stole The Sun From My Heart' is still possibly the worst four minutes of music they've ever been associated with, because tonight's performance is an unmitigated triumph, a wholehearted two fingers up to anyone whose ever doubted them and without doubt, instant re-elevation to the top of rock and roll's premier league, because on this evidence, if there's a better live band anywhere in the world than the Manic Street Preachers, we're yet to see them.

Welcome back, and long may it continue, because on this form they're simply untouchable.