As Great British institutions go, the Manic Street Preachers are surely up there alongside the likes of Twinings Tea and Coronation Street. Now approaching their twenty-fifth year of existence, album number ten having hit the record stores last month, and still as passionately outspoken as ever. Not to mention one of the most exciting live bands on the planet today, with arguably the most comprehensive back catalogue of songs to choose from almost anywhere you care to mention at this present moment in time. 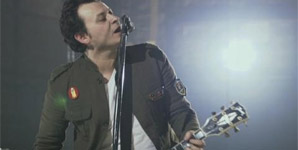 That they've taken another long-standing institution, albeit one of a criminally less celebrated nature in British Sea Power along for the ride makes this current tour - their largest ever on UK shores, fact fans - an insatiable event in its own right, and one that borders on the unmissable, regardless of what either act chooses to include within their sets each night.

The fact that British Sea Power are even still considered a support band after a decade of creating astoundingly consistent records while lumpen ladrock like Kasabian sell out arenas is a travesty in itself. These days operating a six-piece, British Sea Power have an arsenal of songs to fall back on themselves, making it difficult what not to include for their understandably short forty minute set. Opener 'Carrion' still resonates with the same levels of beauty and intensity it did upon release back in 2003, while the likes of 'Atom' and 'No Lucifer' along with quaking instrumental blow-out 'The Great Skua' all highlight what an underrated record 2008's 'Do You Like Rock Music?' really was. By the time 'Lights Out For Darker Skies' brings tonight's set to a close, we're at an even bigger loss to explain why this band aren't ridiculously huge let alone commercially successful. In short, a revelation.

For the Manics as they've affectionately come to be known, its not so much a case of business as usual but more one of throwing in the odd unexpected firework or hand grenade, depending which side of the post-'Holy Bible'/pre-'Everything Must Go' fence one sits on. Despite having an album to promote, their decision to play less than half of 'Postcards From A Young Man' in favour of rarely aired gems from yesteryear such as 'Suicide Is Painless' and 'The Masses Against The Masses' seems to have split the Assembly Rooms in two going by the response - or lack of - each receives from a large proportion of those present. That the often misjudged yet quite good actually 'Gold Against The Soul' era also seems to be back in favour, demonstrated here by resounding renditions of 'Sleepflower' and 'Roses In The Hospital' and an astonishing solo performance of 'La Tristessa Durera' by James Dean Bradfield further confuses those whose earliest dalliance with the band obviously occurred via 'Design For Life'.

Not that their more familiar material is anything less than sensational this evening. 'If You Tolerate This Then Your Children Will Be Next' and 'Kevin Carter' both fuse impeccable pop hooks with intelligent, thought-provoking sentiment aplenty while the vitriolic fury of 'You Love Us' and 'Motown Junk', the latter introduced by a brief snippet of The Skids' 'Into The Valley' both indicate the vigour of youth that introduced the band to the world all those years ago hasn't diminished with middle age.

Overall, tonight's show marks yet another triumphant chapter in the career of a band whose standards never seem to waiver, particularly on the live arena where every performance signifies an event. Timeless, not to mention flawless.