On realising that in this day and age, there is very little guitar music impacting on the top 40, The Manic Street Preachers are celebrating 21 years in the charts by playing 38 of their singles (with a few nit-picking omissions admittedly, such as Suicide Alley and the awesome P.C.P) at London's vast, cavernous O2 arena. Indeed, very few bands actually make it to almost 21 uninterrupted years of making music, so this celebration, dubbed 'A Night of National Treasures' seems entirely justified. What followed on the night was a 3 and a half hour thrill ride through a sprawling and eclectic back catalogue, with confetti, video screens and costume changes, making for more of a special event than just another rock show. 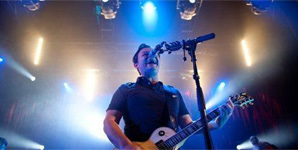 For a show where the set list has essentially been disclosed to you months before it takes place, it would be hugely unfair to criticise it. All of the big hits are there - The Masses Against the Classes, If You Tolerate This, Motorcycle Emptiness and of course, A Design For Life - all getting a great deal of applause and a great crowd reaction. The crowd also go wild for stunning renditions of the louder, more punk inspired numbers like You Love Us, a blistering run through of Motown Junk and Revol, which for the most part gets overlooked in Manics set lists, but on the night was an absolutely furious highlight, with Nicky Wire mentioning at the end about putting his shoulder out in typical fashion.

The Manics themselves were in fine form in terms of onstage banter as well, seeming just as surprised at making it through 38 songs as everyone else. There was plenty of interaction with the huge audience and of course, a great story about Richey to introduce Revol.

But it was on the more obscure songs where the band really and truly shone at this show. The guitar solo in Love's Sweet Exile raised the roof, but the more expansive, mid-period experimental Manics material allowed the band, and it's 2 additional musicians - Sean Reed and Wayne Murray - to show their worth. Empty Souls from the much maligned Lifeblood and There by the Grace of God showed an entirely different side to the Manics and show that the more experimental material that this band produce is criticised very unfairly. Indeed, the spaghetti western trumpet intro to Ocean Spray was probably one of the best moments of the night, as was Let Robeson Sing with Gruff Rhys from Super Furry Animals.

Overall, A Night of National Treasures was an absolutely fitting temporary send off to a truly brilliant and inspiring band who have become something of an institution. We will probably never see the Manic Street Preachers play a show this big again, but there is still a loyal fan base waiting eagerly for whatever they come back with after their 2 year break. Long live the Manic Street Preachers - National Treasures indeed.