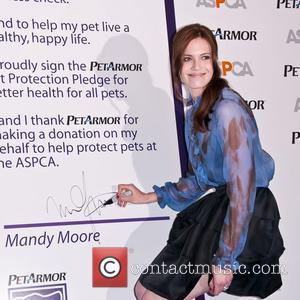 Picture: Mandy Moore Mandy Moore and the ASPCA celebrate the launch of PetArmor and announce a National Awareness Campaign to elevate the importance of pet healthcare...

Singer/actress Mandy Moore still pinches herself when she recalls the day she filmed an Elton John music video with her parents and Elizabeth Taylor - because it was the stuff dreams are made of.
Moore appeared in the promo for Elton's Original Sin - and she landed roles in the video for her parents, as extras.
She tells WENN, "I actually got to work with both Elton and Elizabeth Taylor. They were both in the music video. It was a crazy once-in-a-lifetime experience.
"I grew up listening to his music and my parents actually got to be extras in the music video as well - and they grew up with Elton's music as well, so it was definitely a moment in time for sure. We all got to dress up like we were concertgoers at an Elton John concert in the '70s, so they got to wear some pretty funky duds.
"I met Elizabeth that day but her part in the video and mine didn't necessarily intersect, but it was still neat to be part of a project with two legends."