Malcolm McLaren was laid to rest after an emotional service and a procession through London today (22.04.10). 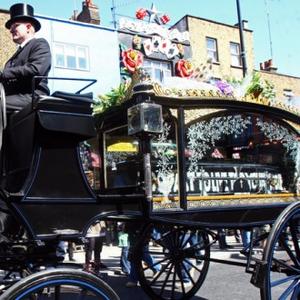 McLaren's family, including partner Young Kim and ex-partner fashion designer Dame Vivienne Westwood - who wore a headband which said 'chaos' - and their son Joseph CorrÃ© also paid their respects to the former manager of the Sex Pistols, who claimed to have created punk.

Vivienne told the BBC: "I am very, very sad that unbelievably Malcolm is dead and I just wanted to say on this cruel, cruel day. Get a life, do something with it."

McLaren died earlier this month aged 64, of Mesothelioma, a rare form of cancer.

The service was followed by a public procession of McLaren's coffin - which was adorned with the words "too fast to live, too young to die" in graffiti style letters on its side - through the London Borough of Camden, up to Highgate ceremony, where he is buried.

The coffin was led through the town's high street by a horse drawn cart, and followed by a green double-decker bus containing the funeral party, with one of McLaren's slogans, "Cash from Chaos", written on its outside, and "Malcolm was here" on the back.

The route was lined with old punks and those gathered were encouraged to take part in a 'Minute of Mayhem' rather than the traditional minute of silence, at midday.

Sex Pistols guitarist Steve Jones had written a jokey tribute, referencing arguments over royalty payments, which was read out by Corre.

It said: "Dear Malcolm, did you take the money with you? Is it in the coffin? Do you mind if I come back tomorrow and dig you up?

"I always had a soft spot for you. You showed me a lot when I was 17. And I owe you a lot for showing me a different side to life."