In The Name Of... Review

An intriguing mixture of almost mythically stylised imagery and doc-style realism makes this deeply internalised Polish drama both engaging and urgent. The characters are so earthy that they feel like real people rather than actors. And the filmmaker's sensitive but unflinching approach forces us to think about big issues from a fresh perspective. 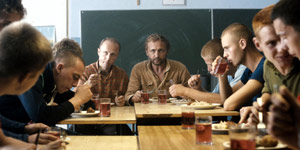 It's set in a rural village, where Father Adam (Chyra) quietly stands up to the entrenched bigotry and fear of his parishioners. Gently nudging them into a more accepting approach to things like mental and physical disability, Adam has a much more personal reason for trying to encourage tolerance: he's in an internal struggle against his own gay longings. And these feelings come to the surface when he befriends the simple, young Lukasz (Kosciukiewicz), who has been badly bullied by the rough-housing boys in the local reform-school. But when their relationship takes a romantic turn, Adam knows that he will need to move on.

Filmmaker Szumowska doesn't really bother to fill in the details of the plot, instead concentrating on the interaction between Adam and the people around him. These include the lonely Ewa (Ostaszewska), who flirts shamelessly with him, a teacher (Simlat) at the school and a young thug (Gajko) who confesses to being in love with his even more bullying classmate (Schuchardt). But the main focus is on Adam's internal war, as he tries to balance his strong faith with his physical yearnings.

Continue reading: In The Name Of... Review

Watch the trailer for Katyn

In the Name of... Movie Review Watch the trailer for KatynAndrzej Wajda directs Katyn, the brutal true story of what happened...