Peter Sarsgaard and Maggie Gyllenhaal know the gender of their unborn baby so have been ''trying out'' names for the impending new arrival. 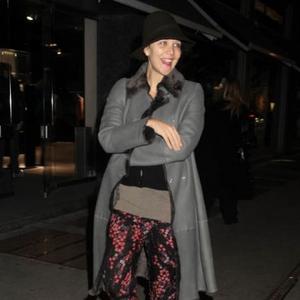 Maggie Gyllenhaal and Peter Sarsgaard have been "trying out" names for their unborn baby.

The couple - who already have a five-year-old daughter, Ramona, together - are expecting their second child and know the gender, but are not yet decided on what to call the youngster.

Peter - who declined to disclose whether they are having a boy or a girl - said: "It's the nice thing about knowing the gender of a child: you don't have to call it 'it,' which gets really weird after seven months in. So we've been trying out a few names, but nothing solid."

The 'Lovelace' actor also admitted he is expecting Ramona to get "bored" with her new sibling quite soon after it is born.

He told Usmagazine.com: "[Ramona] doesn't know what she's in for.

"I've seen kids with siblings - I don't have any siblings, so I don't know - but they generally go for about five minutes, 'Oh, cool! Anyway, what are we going to do now? Can we return it?'

"I think it gets boring quickly, at first, and it takes a while for them to Bond."

Maggie, 34, has not had many cravings during her pregnancy, but she is not enjoying eating meat.

Peter added: "She has not been into eating meat. It's been recommended for the iron, I guess. We ordered it and we both kind of looked at it, because I don't eat a lot of meat either, so we just sort of sat there and thought about it."