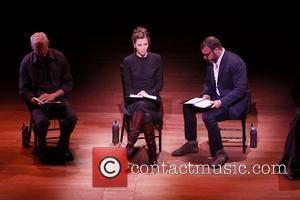 Maggie Gyllenhaal, the American actress and star of 'Donnie Darko' and 'The Dark Knight', appeared on the Discovery channel's 'Curiosity' series on Sunday (21st August 2011) to speak to school viewers on the science behind female sexuality, reports the Inquistr.
The new series, which premiered on 7th August 2011, began with the physicist and author RICHARD DAWKINS attempting to answer the question of whether there is a god. Following the initial one hour special, actress Michelle Rodriguez hosted the second episode about alien invasions and what would happen if the earth was visited by extra-terrestrials. Sunday's episode, hosted by Gyllenhaal, tackled the subject of female sexuality. The show's Senior Executive Producer Simon Andreae told Fox News, "We wanted to make a film about female sexuality in particular, which has often been more debated than male sexuality, which is pretty straight forward". Maggie was reportedly chosen to host the episode because she has starred in "edgy, independent movies specifically about sexuality", most notably 'Secretary' and 'SherryBaby'.
Future episodes in the series include comedian and actor Robin Williams discussing how drugs work and movie writer Eli Roth delivering an episode about the nature of "evil". Samuel L Jackson will tackle the tricky subject of how the world will eventually end.