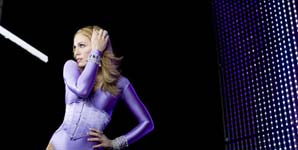 Madonna returns with her stunning new single 'Sorry' on Warner Bros Records, released February 20th. The second track to be taken from her critically acclaimed, million-selling album 'Confessions On A Dance Floor', it follows the international Number 1 smash hit 'Hung Up' and is undoubtedly one of the stand-out tracks from the LP.

Written and produced by Madonna and Stuart Price, 'Sorry' purrs addictively with its electric glow and powerful discotheque grip. Released on three formats, it will be available on 2-track CD, Maxi CD and DVD. The 2-track and Maxi CD feature exclusive remixes of the album track 'Let It Will Be' which was recorded at her incredible live show at London's KOKO in November.

'Confessions On A Dance Floor' is one of the best-selling and celebrated LPs of the year. It has sold a stunning 1 million copies since its release in November, reaching Number 1 in twenty-nine countries and is already certified triple platinum.

Madonna is officially the most successful international female solo artist in the world, ever. Her global album sales have reached 200 million, while she has had 58 Top Ten UK hit singles including 11 Number 1s, 9 Number 1 albums and spent 2000 combined weeks on the UK charts. In America she holds the record for 27 consecutive Top 20 entries by a female artist and 16 successive Top 5s, plus a dozen Number 1s - ten of which she wrote.

"Madonna is back at what she does best. The choruses of Sorry and Get Together are triumphant" – The Guardian

"The album's opening triple salvo of Hung Up, Get Together and Sorry speak for themselves" - Mixmag