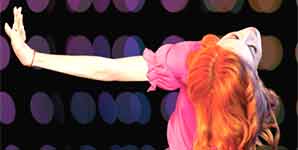 "I want people to jump out of their seats! My record is about having a good time straight through and non stop," says Madonna, still the ultimate disco queen, as she describes the 12 delicious tunes on her album of pure 'unapologetic' dance music.

"She has a dance halo over her head" says Madonna's co-producer and partner in crime, Grammy-award winner Stuart Price. "It's in her blood. The music came straight from the gut - no preconceived notions - unencumbered - not over edited - just very spontaneous. We sat in my little studio at home and the songs just flowed very quickly," concluded Price.

With one foot in the early roots of her career as a "dance artist" and the other foot planted firmly into the sound of "future disco", Madonna returns to the clubs with a vengeance "CONFESSIONS ON A DANCE FLOOR" is scheduled to be released on Warner Bros. Records, November l5th, 2005.

The album's first single Hung Up is scheduled to be released on November 7th.