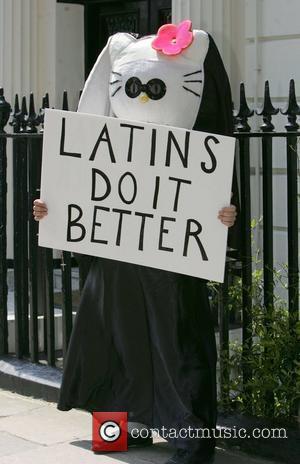 Picture: The strangely dressed nun/cat which Madonna had to avoid as she left her London home for her gym London, England - 13.05.08

A-list stars including Madonna, Beyonce Knowles, Britney Spears, JAY-Z and Jack Nicholson have made generous donations for a charity auction to raise money for AIDS. The super-sale dubbed Bid 2 Beat Aids will kick off on action site eBay on World Aids Day, 1 December (07). The list of participating celebrities also includes, Matt Damon, Jessica Alba, Jessica Simpson, Owen Wilson and many more. Items on offer include an iPod designed by Yoko Ono; Borat's hat; a CD signed by Vanessa Hudgens and Spiderman doll signed by Tobey Maguire. Proceeds benefit LIFEbeat, the Music Industry Fights AIDS to support its ongoing AIDS/HIV programs nationwide. The centrepiece of the auction is series of paintings created by celebrities who traced their hands on special paper, adding their personal artistic touch and signature.