Rihanna, Madonna And Zendaya: The Ten Most Eye-Catching Dresses Of The 2017 Met Gala

Celebrities took to the Metropolitan Museum of Art to display their edgiest red carpet looks.

Here are some of the most eye-catching pieces from the New York City event: 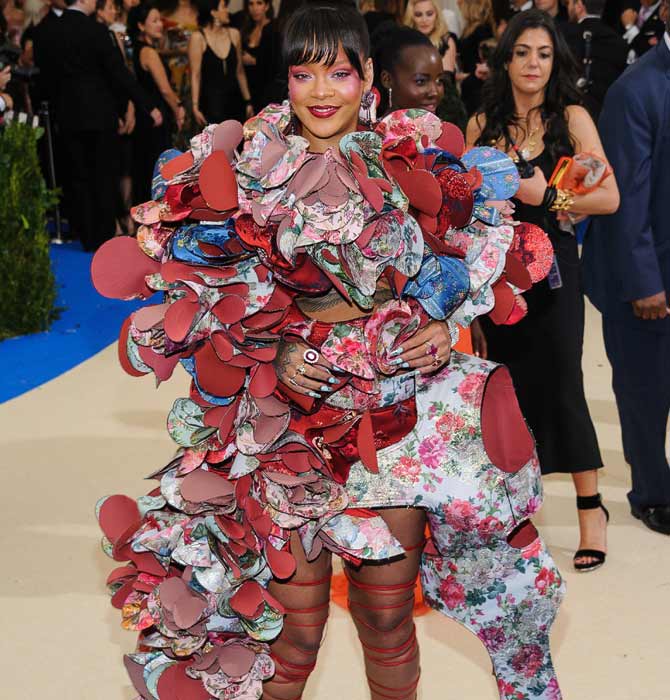 Rihanna - This Barbadian beauty has never been one to shy away from a crazy fashion opportunity, and indeed she took the edgy theme to the next level with her Comme des Garçons piece adorned with red and floral folds and teamed with scarlet heels that laced all the way up to the thigh. Sure, she kind of looked like a parade float, but you have to admire her daring. 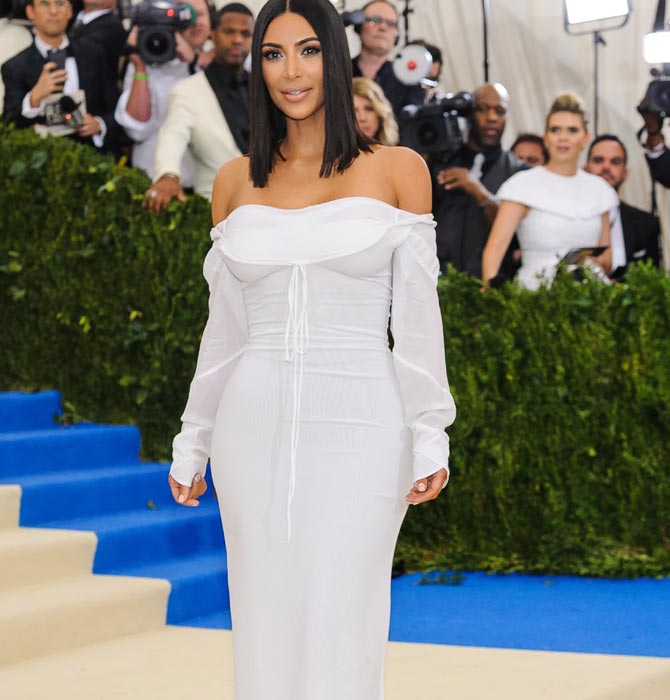 Kim Kardashian - A slightly more demure look - floor-length with long-sleeves - was what the 'Keeping Up With The Kardashians' star went for. Despite being well-known for flashing flesh, Kim wore a white, off-the-shoulder Vivienne Westwood design that was a world away from the kind of outfits she used to wear before her miraculous transformation towards the end of last year. Kendall Jenner - Serving body in a completely see-through La Perla dress was catwalk model Kendall. It's the kind of outfit that would be totally unforgiving on most people, but this confident young reality star knows that clothing is all about showing your best assets - in her case, her entire figure. Jessica Chastain - Jessica Chastain or Belle from 'Beauty and the Beast'? 'The Zookeeper's Wife' actress was a breathtaking Prada princess in a lemon yellow gown with a long, floaty train and off-shoulder sleeves. It was a simple look, but one that emits so much sheer beauty that everyone's talking about it. 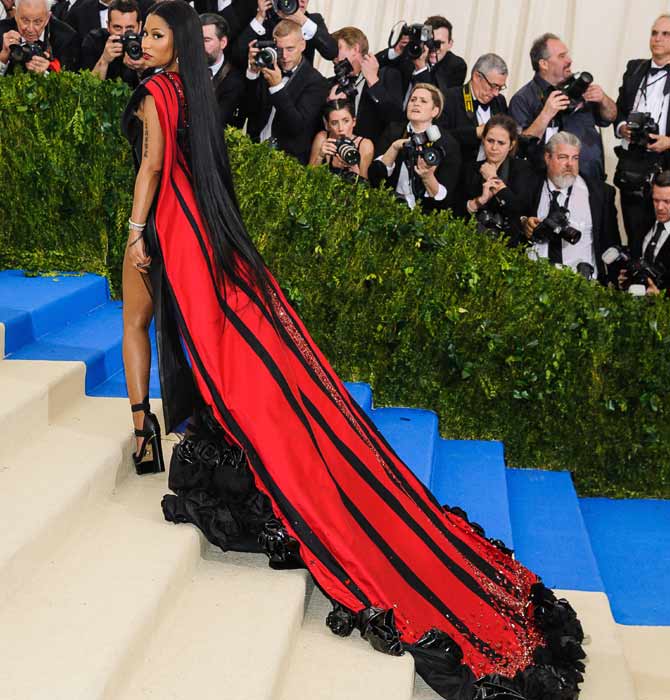 Nicki Minaj - Rap queen Minaj went over all gothic showgirl with her outfit; a black bodysuit from the front that transforms into a glittering black and red trailing cape from the back. Interestingly, instead of aiming for the big fashion names, she and her stylist Maher Jridi teamed up with H&M to create this unique look. 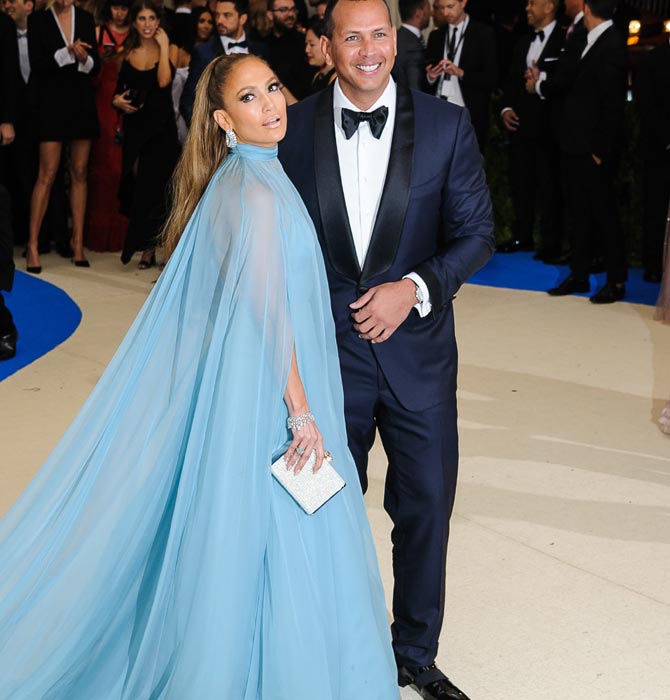 Jennifer Lopez - In quite the contrast to her Billboard Latin Music Awards outfit last month, J-Lo decided to cover up as much as possible for the fashion event of the year. She was cloaked in beautiful sky-blue sheer material from the neck down, and joined on the red carpet by her boyfriend Alex Rodriguez and Valentino himself who designed the outfit. 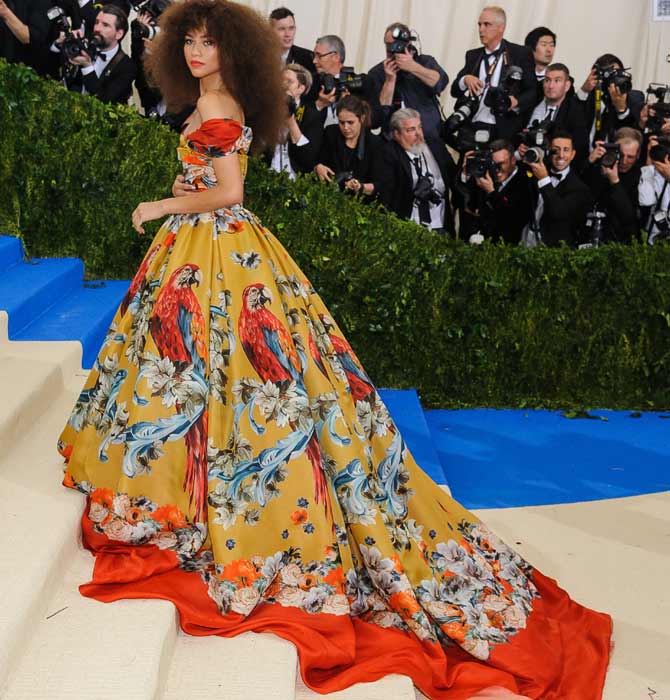 Zendaya Coleman - Zendaya was a tropical queen with her orange and yellow Dolce & Gabbana look. Despite the parrot imagery on the billowing skirt of the dress, she certainly wasn't imitating anybody else at the gala. She truly stood out with her exotic glamour. 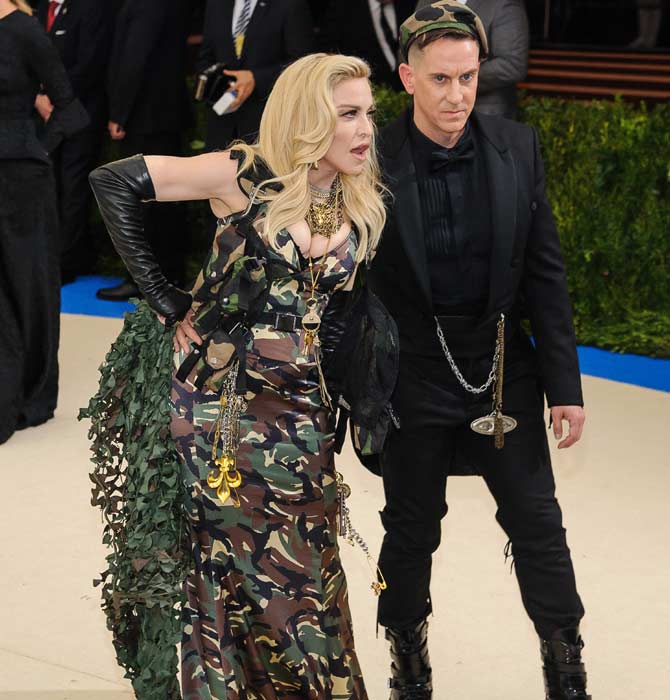 Madonna - Probably the most controversial gown of the night was Madonna's camouflage Moschino number complete with weapons vest, an army green canteen and a train of mesh army tarp. Sarah Paulson showed how impressed she was on the red carpet, and even held her train. Madonna was joined by Moschino designer Jeremy Scott. Serena Williams - At five months pregnant, this tennis champion was glowing with the effects on oncoming motherhood and she was made all the more beautiful by a gorgeous green, halter-neck Versace dress that flattered her curves while showing off her burgeoning baby bump. It's safe to say she's enjoying her period of maternity leave.

Blake Lively - Accompanied by her husband Ryan Reynolds, 'The Shallows' star was as usual one of the best-dressed at this year's Met Gala. She never fails to make a glamorous impression, and this occasion was no different as she showed up wearing a gold Atelier Versace gown with a fishtail of bright blue feathers.