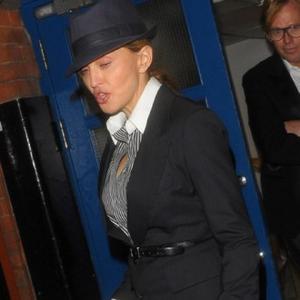 The singer - who has also worked on a clothing line entitled Material Girl with her 13-year-old daughter Lourdes - is said to have gone to the set of the video to meet with photographers Mert Atlas and Marcus Pigott, but ended up directing the shoot instead.

Model Ginta Lapina explained to Love magazine: "We were supposed to shoot a video, so Madonna said she wanted to direct it. They said she could do it but they weren't going to pay her and she started laughing. She put on her iPod and taught us moves and we shot the video for two hours."

Ginta, along with fellow models Lindsey Wixson, Daphne Groeneveld and Siri Tollerod, are all seen dancing to heavy base music in front of strobe lights while wearing Miu Miu's coveted embellished dresses teamed with kitten heels and patent handbags.

However, it hasn't all been plain-sailing for Madonna's ventures in the fashion world.

The '4 Minutes' singer is being sued by LA Triumph for using the Material Girl name for her brand, after the company has been using the title for its own clothing collection since 1997.