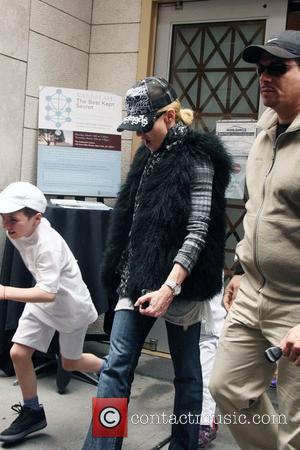 Madonna has applied to close the seas around Helsinki, Finland so she can commandeer a small island to stage a gig for 80,000 people, according to reports.
The Holiday hitmaker is taking her Sticky & Sweet world tour to Jatkasaari, Helsinki in August (09).
And she has applied to officials to close the sea and airspace over the area to prevent ticketless fans from enjoying the spectacle for free, reports Britain's Daily Star Sunday.
A source tells the publication, "Madonna couldn't find a stadium in Finland big enough for all her fans so instead she's taking over an island.
"But to stop people watching from the water on boats, she and the promoters have applied to close the sea. She's also worried people will hire helicopters to watch from the sky so she wants to close the airspace over the site as well."
But locals are not happy with the request and are worried about the effect the concert will have within the community.
One says, "Who does Madonna think she is? To have 80,000 people in such a small area is a joke. We don't have the facilities to cope with so many people."