Madonna: The Pope would love my shows

Madonna believes Pope Francis would love her concerts because they're ''about love'' and has praised the Catholic leader, despite her sketchy past with the faith. 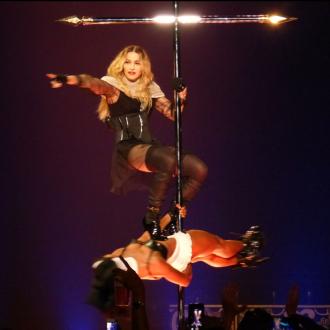 The 'Living For Love' singer believes the Catholic Church leader is much more open-minded than some of his predecessors so would enjoy her 'Rebel Heart Tour' shows, despite the fact she grinds on a crucifix and has pole dancing nuns in her live shows.

Asked if she thinks he'd like her show, she said: ''I do, actually, because at the end of the day, the message of my show is about love, and that's his message.''

The 57-year-old pop icon has a chequered past with the Catholic Church, which began when she portrayed Jesus Christ as a black man in her 1989 'Like A Prayer' video, and has since been excommunicated following several scrapes.

However, she still feels a connection to the faith, having been brought up with the religion by her father Tony Ciccone.

She explained: ''I was raised a Catholic, and no matter what spiritual path I might go down, I always feel some kind of inexplicable connection with Catholicism. It kind of shows up in all of my work, as you may have noticed.''

And although she doesn't have a great history with the Vatican, she praised Pope Francis for being far more ''open-minded and accepting'' than previous figures.

In an interview with Rolling Stone magazine, she said: ''I'll state the obvious and say that he seems like he's a much more open-minded individual, who seems to be moving outside of the dogma of the Catholic Church that has been set in stone since the days of Constantine. So I think it's good.

''It's good to look out into the big, wide world and see that we have changed, and at the end of the day the message of Jesus is to love your neighbour as yourself, and so that means not judging. And to do that, you have to be more open-minded and accepting of people who have lifestyles that you perceive as unconventional. So I think it's good, yeah. And I also believe that he's the kind of Pope you could sit down and have a cup of tea with, and/or that you could make a joke about something and he would laugh about it.''