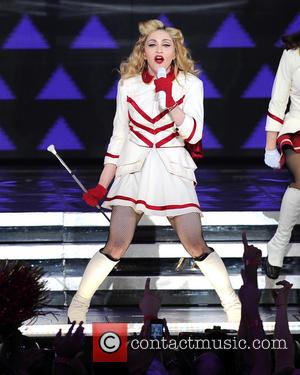 When it comes to the live tour, it’s the veteran artists of the music scene that are still leading the way on ticket sales. Billboard revealed the highest grossing tours of 2012 recently and it was perhaps no surprise that the ageing Queen of Pop Madonna came out top of the list – the 53 year-old seems to have been on tour constantly this year.

Reuters reports that the music chart and stat compiler had her earning an estimated $228.4 million from her 80 plus shows performed during the year. She’s not quite done yet either, with a couple more shows in South America due this week. She’ll be delighted to have beaten her rival Lady Gaga, who is in sixth spot with takings of $124.9 million from her Born This Way Tour; it’s worth pointing out though that Gaga is only midway through the jaunt at the moment, and won’t wrap up touring until finishing in the US in March 2013.

The rest of the top five is full of well-established names; Bruce Springsteen and the E Street Band were second with $199 million from 72 shows, whilst Pink Floyd’s Roger Waters was third with $186 million. Cirque De Soleil made an appearance in fourth with their homage to Michael Jackson taking $147.3 million from 183 shows, whilst Coldplay were fifth with $147.2 million from 67 shows. The list was compiled from estimated gross ticket sales.