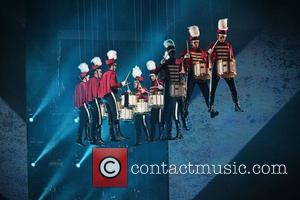 Picture: Madonna performing at the Helsinki Olympic Stadium as part of her MDNA-tour Helsinki, Finland - 12.08.12

A group of conservative activists in Russia have filed a $10.5 million (£6.5 million) lawsuit against Madonna after she publicly voiced her support for gay rights during her concert there earlier this month (Aug12).
The Material Girl performed in St. Petersburg on 9 August (12) as part of her Mdna world tour and pink wristbands were handed out to audience members so they could show their backing to the lesbian, gay, bisexual and transgender (Lgbt) community at the gig.
Midway through her show, Madonna stripped off to just a black bra to reveal the words "No fear!" written on her back as she urged the crowd to hold their bracelets high, declaring, "If you are with me, I wanna see your pink armband. If you are with me, raise your arm and show your love and appreciation for the gay community. Are you with me?"
But Madonna's outspoken views have allegedly insulted locals in the notoriously conservative city, where residents face fines for promoting homosexuality to minors, and 10 furious protesters from the Union of Russian Citizens, the People's Assembly and the New Great Russia party joined forces to file suit against the singer on Friday (17Aug12).
One plaintiff, Darya Dedova, says, "She (Madonna) had been warned with words that she should behave in line with the law and she ignored it. So we will speak in the language of money. Of course, it is difficult to measure moral damages and suffering but maybe people who earn money regardless of moral rules will better understand this."
The Russian leg of Madonna's Mdna trek also hit headlines days before the St. Petersburg gig after she took to the stage in Moscow and called on Russian authorities to show leniency to jailed female punk stars Pussy Riot, who were on trial accused of playing a protest song against Russian President Vladimir Putin in a church in February (12). They were found guilty on Friday (17Aug12) and sentenced to two years each in prison.