Madonna Speaks About Her Brits Fall: "My Core Strength Saved Me"

The legendary star attributed being able to continue her performance of 'Living For Love' to her good physical shape, and her "guardian angels".

Madonna has spoken at length for the first time about that fall at last week’s Brit Awards, saying that she “wouldn’t have survived” if she hadn’t been in such good shape physically.

In an interview with Jon Pareles of the New York Times, the singer credited her experience of how to fall properly as a result of training in how to ride horses in ensuring that she was relatively unhurt by the tumble. 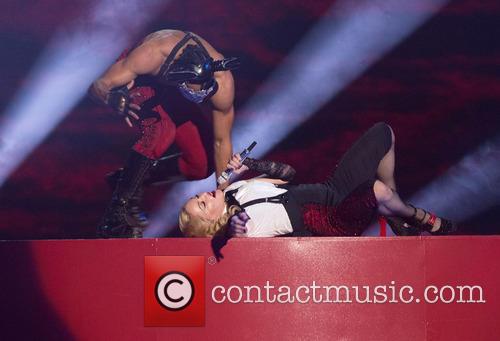 Madonna performing at the 2015 Brit Awards

In an incident that went viral almost instantly, the singer was pulled backwards off a podium and hit her head when a cape she was planning to discard with a flourish failed to detach itself. She was performing her new single ‘Living For Love’ from her thirteenth album Rebel Heart to close out the Brit Awards ceremony.

Since then, she’s been trading accusations with designer Giorgio Armani as to whose fault it was that the costume malfunctioned. She said it was too heavy to open quickly enough, and the designer hit back by describing her as “very difficult”.

Speaking about the fall itself, the star was insistent that it was painless at the time because her focus in getting the job done. “I didn’t feel anything when it happened,” she recalled. “I just remember falling backward, and I hit the back of my head.”

“But I had so much adrenaline pumping, and I was so taken by surprise that I just was, OK, I have to keep going. So I just got back onstage and I just kept going.”

More: Madonna admits she wouldn’t tell her children not to try drugs