Madonna Marked The Launch Of Her Rebel Heart World Tour By Bringing Dj Diplo Onstage To Spank Him During A Risque Section Of The Show On Wednesday Night (09sep15). 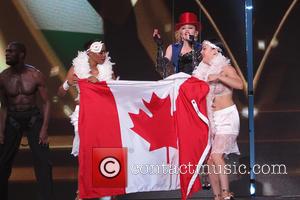 Picture: Madonna - Madonna performing live on the first night of her 'Rebel Heart Tour' at the Bell Centre in Montreal at Bell Center - Montreal,...

The music producer opened the event in Montreal, Canada before the Material Girl hitmaker took to the stage, but she brought him back on again for her penultimate song, Unapologetic B**ch, which they collaborated on.

Midway through the track, she asked for a volunteer and her dancers pulled Diplo, real name Thomas Pentz, onto the runway. She danced with him as her troupe circled around them, before they grab Diplo and bent him over.

Madonna then hit his bottom while saying, "You've been a very bad boy... take it like a man" before kicking him with her heeled boots and simulating a sexual act while stood behind him.

He remained on stage dancing until the song ended, and then Madonna presented him with a banana as a "prize" for volunteering.

She rattled through a 23-song setlist, which included tracks from her recent album Rebel Heart, and classics such as Vogue and Holiday, plus a cover of Edith Piaf's La Vie En Rose.

Madonna previously postponed the first five dates of the tour, which were due to take place in August (15), as she felt the production was not ready.

She is scheduled to perform in Montreal again on Thursday night (10Sep15) and the world tour runs until March (16).