Madonna - who has previously modelled for Dolce and Gabbana - has urged the designers to ''think before they speak'' following their controversial stance on IVF and gay adoption. 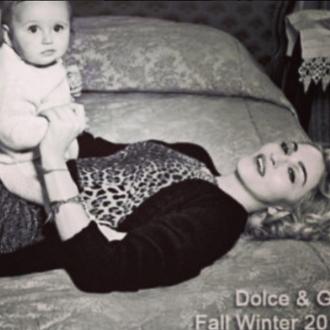 Madonna has advised Domenico Dolce and Stefano Gabbana to ''think before [they] speak''.

The 'Living For Love' singer is the latest star to speak out against the design duo following their controversial stance against gay adoption and branding children conceived through fertility treatment ''synthetic''.

Posting a picture of herself holding a baby while modelling for Dolce and Gabbana, she wrote on Instagram: ''All babies contain a soul however they come to this earth and their families. There is nothing synthetic about a soul!! So how can we dismiss IVF and surrogacy? Every soul comes to us to teach us a lesson God has his hand in everything even technology! We are arrogant to think Man does anything on his own. As above so below! Think before you speak.''

Madonna's comments come after Sir Elton John - who has sons Zachary, five, and Elijah, two, with husband David Furnish - called for a boycott against the designers.

He wrote on Instagram: ''How dare you refer to my beautiful children as 'synthetic'. And shame on you for wagging your judgemental little fingers at IVF - a miracle that has allowed legions of loving people, both straight and gay, to fulfil their dream of having children. Your archaic thinking is out of step with the times, just like your fashions. I shall never wear Dolce and Gabbana ever again. #BoycottDolceGabbana''

Other stars to slam the designers include Courtney Love - who said she wanted to ''burn'' her D&G clothing - Sharon Stone Martina Navratilova, Ricky Martin and 'Glee' creator Ryan Murphy.

In response to the calls for a boycott, the designs have slammed the outcry as ''medieval''.

Gabbana said: ''Boycott Dolce & Gabbana for what? They don't think like you? This is correct? This is not correct. We are in 2015. This is like medieval. It's not correct.''