Madonna and Sean Penn reunite in Manhattan for the screening of Madonna's new short film 'secretprojectrevolution'. 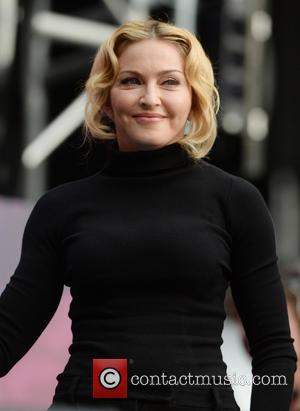 On Tuesday night (Sept 24th) in Manhattan, New York saw the launch of a new short film by Steven Klein called 'secretprojectrevolution' which is also part of Madonna's 'Art For Freedom' project that promotes free speech as a way to address persecution and injustice around the world.

Oh and she ran into ex-husband, Sean Penn, at the event.

The former flames haven't been married for 24 years but they embraced each other with hugs and kisses like they were never apart. The pair were married from 1985 until 1989 and the relationship was known for violent outbursts against paparazzi photographers as well as one another.

In 1987 Madonna checked into Cedars Sinai hospital for x-rays after Penn hit her across the head with a baseball bat.

The actor was later charged with a felony domestic assault but he pleaded to a misdemeanour, it is no surprise that their marriage ended in divorce in 1989.

However that looked all to be in the past as the singer seemed very appreciative her ex hubby came out to support the new short film which she co-directed with photographer Steven Klein.

'Secretprojectrevolution' centres on the artist being thrown in jail for perceived obscenity, she sings a creepy version of "My Country, 'Tis of Thee" and there images of guns and blood throughout the 17-minute clip. Madonna also acts as the narrator and asks for everyone to join her in the "revolution of love"

The 55 year old singer even beckoned the stage to perform a series of dances and the Eliot Smith song 'Between the Bars' that was featured on the 1997 movie 'Good Will Hunting'.

The short film was broadcast via guerilla screenings in 12 cities around the world on Monday and Tuesday.

Watch Madonna perform 'Between the Bars' below