Madonna tweeted to say how proud she is of her daughter's acting in her school production 'A Flea in her Ear'. 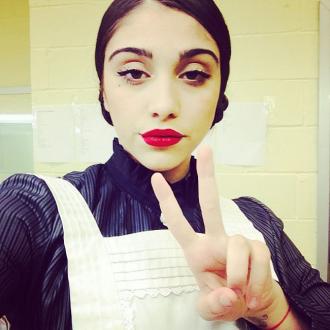 Madonna is ''so proud'' of her daughter.

The 'Hung Up' hitmaker shared a photograph of 17-year-old Lourdes - her child with former boyfriend Carlos Leon - on the final night of her school production 'A Flea in her Ear' and said she had enjoyed watching the show at Manhattan's LaGuardia Performing Arts school.

The production comes weeks after the teenager played Betty Rizzo in another school play, 'Grease!'.

Her mother had sat proudly in the audience with her younger children, David and Mercy, both eight, and reports said Lourdes was very impressive.

One source said: ''[She was] really good. She is a great singer, dancer and actress and seemed completely comfortable on the stage.

''She also seemed like she was having a lot of fun with the part.''

And Lourdes is already looking into what to do next as she and her mother were spotted visiting the singer's former college, the University of Michigan, a few months ago.

Madonna has previously declared a wish for her daughter to study there, saying: ''I want my daughter to go there. I keep telling her, Ann Arbor is an awesome place.''