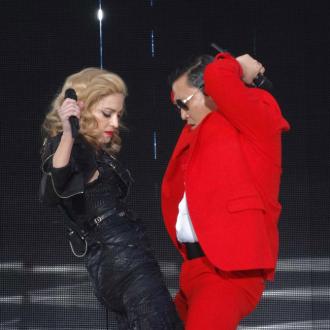 The 'Girl Gone Wild' singer - who is currently on her worldwide 'MDNA Tour' - unveiled the South Korean pop sensation as her special guest at the concert at the city's Madison Square Garden, where they performed a mash-up of her song 'Give It To Me' and his cult smash 'Gangnam Style'.

Madonna even performed Psy's 'horse' dance - copied by stars including Mel B and Heidi Klum - and at one point crawled between his legs.

The event comes just a week after the 54-year-old star was ''rejected'' by Lady Gaga when she asked her to sing with her on stage.

She told a crowd in Minnesota earlier this month: ''I have the best fans in the whole world. So take that, Lady Gaga.

''You know, I invited her to sing with me on stage but she turned me down. It's OK. I've been rejected before. It's good to build character.''

Madonna has previously criticised Lady Gaga for copying her song 'Express Yourself' on her hit 'Born This Way'.

She said: ''I thought, this is a wonderful way to redo my song. I mean, I recognised the chord changes. I thought it was... interesting.''