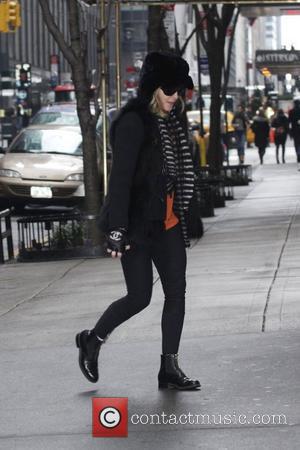 Picture: Madonna and her family are seen arriving at the Kabbalah Center on the day before the Grammys New York City, USA - 11.02.12

Madonna will make history when she performs in Quebec, Canada in September (12) - she'll become one of the only acts to play a paid-for concert at the historic Plains of Abraham battle site.
Officials in Quebec City have relaxed their rule about for-profit concerts on the park grounds - and furthermore they're letting the pop superstar play at the site of a famous 1759 battle between the British and French for free, according to Billboard.com.
Concerts have been staged at the battlefield since 2008 - the centenary of its dedication as Canada's first historic site - but promoters behind shows featuring Sir Paul MCCartney, Metallica, Celine Dion and Madonna's nemesis Sir Elton John have not been permitted to charge a direct admission fee for the Plains of Abraham. Hence the shows were free.
Local promoter Sylvain Parent-Bedard tells the Canadian Press that charging admission means the capacity will be capped and people won't be crammed in like "sardines".
National Battlefields Commission spokesperson Joanne Laurin adds, "Generally, we don't accept any commercial activity, but in this case it's really exceptional... We accepted it because we presume there will be major economic benefits for Quebec City."