Madonna claims Kanye West ''is the black Madonna'' because they have both made careers out of ''the envelope-pushing genre''. 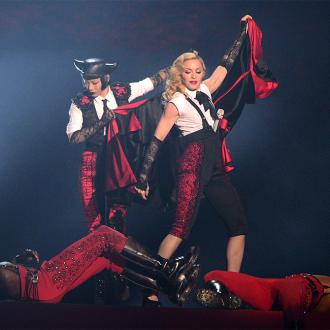 The 'Living for Love' hitmaker believes the 37-year-old musician is very similar to herself because they have both made a career out of pushing boundaries.

The 56-year-old musician explained even the 'All Day' rapper - who worked on the star's new record - has acknowledged their similarities because they often anger and shock people with their antics.

She explained: ''We know, and recognize, that we have that in common.

''We're comrades in the envelope-pushing genre.''

The star made the comments while promoting her 13th studio album 'Rebel Heart', which is out this week, on which she said she reminisced about friends and co-workers who have died during her career.

Speaking to New York Daily News, she revealed: ''There's a lot of reminiscing on this album.

''I've been doing what I've been doing for over three decades, so in many ways I feel like a survivor. I see that many of my peers, and friends, and people I collaborated with are no longer with us. That gave me pause. I said, 'Wow, I can't believe I made it this far.' That was a catalyst for me.

''There's a looking back here, a missing the beginning of my career when I was surrounded by other artists -- not musical artists, but artist-artists -- like Keith Haring and Basquiat and Warhol. It was a time when pop music was more naive and free. I was missing that feeling and that mixture of so many different worlds in New York.''