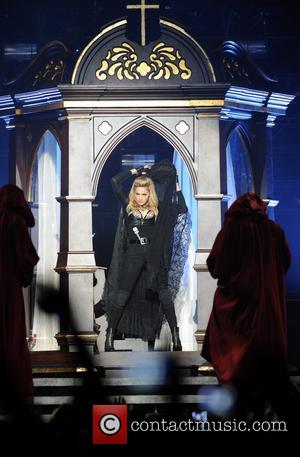 Picture: Madonna performs on the first night of her two sold out concerts of the MDNA Tour 2012 at the Ziggo Dome Amsterdam, Holland - 07.07.12

Pop superstar Madonna helped two fans seal their love for one another during her concert in Amsterdam, Holland on Sunday (08Jul12) after handing over her microphone so the man could propose.
The Material Girl halted her show after hearing about a male in the audience who wanted to pop the question and she willingly shared the spotlight.
She told the guy, "Don't slobber all over my microphone, all right? Here you go. And do it (propose) with feeling. From your heart, baby!"
His girlfriend accepted and Madonna egged on the happy couple as they kissed, shouting from the stage, "Tongues! Tongues! Kiss with tongues! Yeah, yeah, yeah!" before quipping, "Get a room!"
In video footage of the incident, the twice-wed singer then offers up a few words of wisdom to the newly-engaged pair, saying, "I'll give you one piece of advice: never go to bed angry, OK?"
Hesitating, she then added, "Two pieces of advice. Sorry. Learn to say the word (sic), 'I f**ked up.'"
Madonna's first marriage to actor Sean Penn ended in 1989 after four years, while she divorced British filmmaker Guy Ritchie in 2008 after eight years as man and wife.