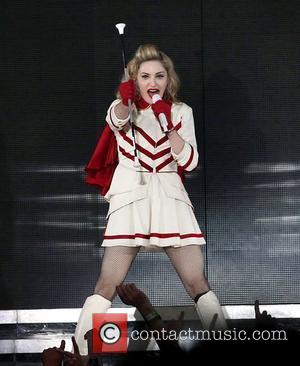 Madonna's love affair with France was dealt a blow on Thursday (26Jul12) as fans booed the pop superstar and pelted the stage with bottles when she ended her set after just 45 minutes.
The singer put on an intimate show for around 2,000 fans at the Paris Olympia venue as a last minute addition to her Mdna tour.
The concert was streamed on the internet and ran for around 45 minutes - a shorter set than her larger arena gigs - and she dialled down the controversy - there was no breast flash during her performance of Human Nature, as there has been at other gigs, but she still brandished a pistol during her final song of the set, Beautiful Killer, despite pleas for her to put her guns away following last week's (20Jul12) cinema massacre in Colorado.
While she was on stage, Madonna had a special message for French right wing politician Marine Le Pen, who has threatened to sue the Material Girl for using an image of her with a swastika on her forehead and an Adolf Hitler-esque moustache.
Explaining the image during her show on Thursday night, Madonna said, "The enemy is not out there, there is no such thing as an external enemy. The enemy is within."
She then addressed Le Pen, adding, "It’s not my intention to make enemies, it’s my intention to promote tolerance."
There was also a message of love, literally, as Madonna stepped offstage at the Olympia - a curtain featuring the words 'Je t'aime' (I love you) closed behind her.
However, the love was not returned by the audience members, who began booing and jeering the star and chanting for her to continue the show. When Madonna did not reappear, footage from the venue shows gig-goers hurling bottles at the stage.
The chanting and booing continued as the audience left the building.