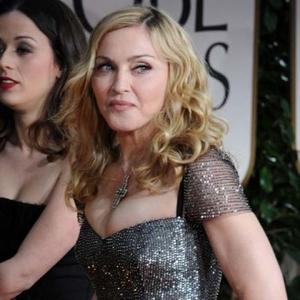 Madonna has been branded "embarrassing" and "desperate" by David Furnish.

The film director was angry his husband Sir Elton John did not pick up Best Original Song at last night's (15.01.12) Golden Globes - losing out to Madonna for her song 'Masterpiece' from 'W.E.' - for his efforts on animated movie 'Gnomeo and Juliet', and criticised her on social networking site Facebook.

"Madonna winning Best Original Song truly shows how these awards have nothing to do with merit. Her acceptance speech was embarrassing in it's narcissism. And her critisism ofGaga shows how desperate she really is.(sic)"

Earlier in the evening Elton had blasted Madonna's efforts, saying he did not believe she could win.

However, Madonna retorted she was ready to fight him to take home the award.

She told Carson Daly: "Was he wearing a dress? Damn him, those are fighting words. OK, well may the best man win."

Accepting her prize on stage at the awards, she said: "This is a surprise. Thank you."