Madonna has decided against wearing a Muslim bridal dress, a combination of a traditional Iraqi bridal veil and a US soldier's uniform, in her new music video after being convinced by her advisers to give the outfit a miss for her own safety. 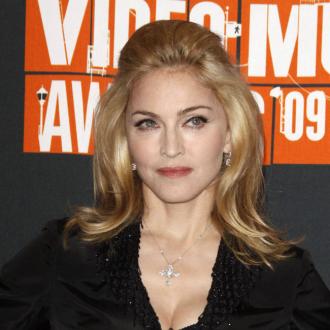 Madonna has decided against wearing a Muslim bridal dress in her new music video over fears for her safety.

The 54-year-old singer was planning to don a 'Terror Bride' outfit - a combination of a traditional Iraqi bridal veil and a US soldier's uniform - in the video for upcoming single 'Superstar' as a statement against oppression against women and war, but her advisers convinced her to ditch the political stunt because of the outrage it would be likely to cause.

A source said: ''Madonna had the outfit ready to go. She was really proud of it and said it was her 'Terror Bride' costume.

''She had paraded around in it and said she was going to wear it in her next music video.

''At first when people started telling her it was madness she just brushed it off.

''But when they mentioned that her actions could put her life at risk she decided to ditch it from her video and certainly won't be wearing it on stage.''

The 'Celebration' hitmaker - who is a devotee of Jewish offshoot religion Kabbalah - had already tried the costume on, and while she is said to be ''really disappointed'' about not wearing the outfit, she hasn't ruled out donning the attire in a music video at some point in the future.

The insider added to The Sun newspaper: ''She was really disappointed as she was so adamant about it.

''And even when she said she wasn't going to go ahead she winked that it was being put aside 'for now'.''

Last month, Madonna caused controversy when she referred to US President Barack Obama - who is openly Christian - as a ''black Muslim'' at a concert in Washington, but she later clarified her comments insisting she was ''being ironic''.

She added: ''Yes, I know Obama is not a Muslim, though I know that plenty of people in this country (America) think he is.''