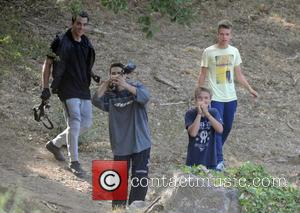 Picture: Timor Steffens - Madonna enjoys a game of paintball with her boyfriend and children on a family holiday near Cannes in the South of France...

Rapper M.I.A. has settled her legal dispute with American football bosses after they demanded she hand over $16 million (£9.4 million) for her naughty middle finger salute during Madonna's half-time show at the 2012 Super Bowl.

National Football League (Nfl) officials sensationally accused the hip-hop star of breach of contract after the big gig, claiming she tarnished the organisation's goodwill and reputation with her rude gesture at the high-profile sporting event.

The provocative Paper Planes hitmaker hit back at the allegations in arbitration papers, insisting painting the Nfl as a "wholesome" group is laughable, citing "the weekly felonies committed by its stars", "the homophobic and racist comments uttered by its players" and "the complete disregard for the health of players and the premature deaths that have resulted from" the nature of the contact sport.

The legal case has been rumbling on for more than two years, but now M.I.A. can finally move on from the fall-out after reaching a private settlement with Nfl chiefs, according to The Hollywood Reporter.