Madonna - Give Me All Your Luvin' Ft. MIA & Nicki Minaj Single Review

Review of Give Me All Your Luvin' Ft. MIA & Nicki Minaj Single by Madonna

Whilst the actual Queen is celebrating her Diamond Jubilee year with no intention of passing the royal baton the long time Queen Of Pop shows no sign of abdicating either. Young pretenders to her throne have come and gone during her 30 year reign but Madonna is keen to show them, once again, who's boss and who's revered footsteps they have the privilege of treading in when they dare to challenge her sovereignty. 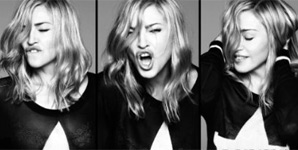 The first single to be released from her twelfth studio album , MDNA, is the less than subtle 'Give Me All Your Lovin'. Using her age old trick, sorry inspired and truly visionary, use of fashionable accessories to compliment her current look Madge started her re-affirmation of intent at Super Bowl XLVI. For this years reincarnation you can substitute William Orbit, Sacha Baron Cohen, Pharrell Williams, Guy Ritchie, Britney Spears, Justin Timberlake, Jean Paul Gaultier and team for Nicki Minaj, M.I.A. and LMFAO.

Whilst the ticket prices for the up coming Madonna World Tour may have risen to levels, apparently "because she's worth it", that some fans have baulked at, the quality of her musical output has definitely not kept pace. The addition of the Ft artists may have looked good on paper but the final result has done little to enhance the reputation of any of the trio. Even the less cynical among us can't fail to see a little desperation in Ms Ciccone's latest attempt to court a more contemporary fan base.

With a global audience of 1 Billion plus for the Super Bowl you would have hoped that the residing memory among those watching was of a stunning back to form performance to blow all of her critics out of the water....not what has actually transpired which is that the popular press are still more obsessed with an ill considered rather lame finger flip. As for the song itself, M.I.A gets lost along the way wallowing somewhere in the mix whilst her wig wearing partner's rap sounds more like one of Cher Lloyds more dubious offerings from an earlier round of 2010's X-Factor.

'Give Me All Your Luvin' isn't a step change for Madonna, it's not a 'Frozen' or a 'Vogue'. It does work on many levels though, most of which have been carefully honed over her long and illustrious career. The tune, ostensibly a Hi-Energy feel good dancable party number, is her forte and here she nearly pulls off another fine example. Had she left the song, minus the 'enghancements', in its more basic Toni Basil meets Kylie format she may have found the less is more approach would have paid dividends.............(If you're in the Madonna camp you probably wouldn't want to be the one to tell her that though, what with jobs being tougher to get these days).