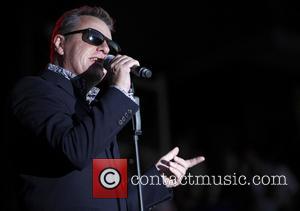 The band was preparing to play on Jools Holland's music show in October (12) when Suggs stunned executives by showing up sporting leisurewear, huge jewellery and a cigar - all trademarks of the shamed broadcaster.

Producers were thrown into a panic as Savile had been unmasked as a serial paedophile following his death in 2011. It has since emerged he sexually abused 450 victims, including 30 children, many of them during his time working at the Bbc.

Suggs was ordered back to his dressing room to change before the band was allowed to perform.

Explaining the incident to U.K. chat show host Alan Carr, Holland says, "You'll probably edit this out but when Suggs came on Later, he had to be stopped from coming on the live version because he'd changed into a tracksuit with a gold chain and a big cigar."

Suggs, who also appeared on the talk show, added: "If only I had kicked them all (abusive celebrities) up the b**locks when I had the chance, it would be a different story."